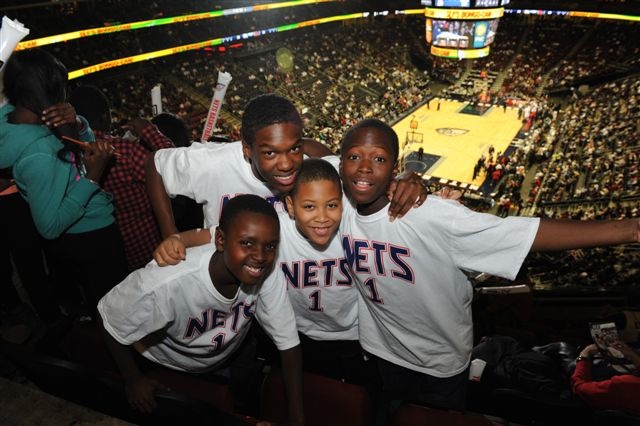 The holiday season is a time of year when most people are at their most charitable. Yet there’s a pack of NBA players who express their holiday cheer all season long. Nearly every team has at least a few players who have sponsored fan sections in which less fortunate people receive complimentary tickets to games. Here are several examples of such sections:

“Growing up in L.A., if I wanted to see a game live, I would have to sneak into the [Great Western] forum,” Davis wrote in an

e-mail. “I love being able to allow kids a chance to watching something that keeps them off the streets.”

He allots 100 Clippers tickets in the 300 level of Staples Center for 10 home contests and meets with the recipients before each game. “I want to be a positive role model to these kids as a person off the court, not just as a basketball player,” Davis wrote.

He explained that he sees the kids as often as possible even though hanging with them in-season isn’t so easy. That’s why camps and clinics he runs in the off-season is when he gets a better chance to get to know the boy and girls in the program. That’s when he can tell them opportunities abound as they figure out what they want to do with their lives. “What I always try to instill in these kids is that while basketball was the career path I chose, there are hundreds of other professions in which you can follow your dreams to be successful,” Davis wrote.

Deron Williams, Utah Jazz: Deron’s Double-Team
Section 119 at EnergySolutions Arena in Salt Lake City receives a block of 20 tickets for each home game, courtesy of Williams. In its four straight year, Deron’s Double-Team offers tickets to assorted non-profit groups, including the Special Olympics, Utah Youth Village and Primary Children’s Medical Center. “It’s about the kids and letting them enjoy the game,” Williams said in an audio file provided by the Jazz.

Even though he hasn’t met with fans pre-game thus far, it’s on his radar. “I heard Baron Davis has a similar giveaway and meets recipients after games. It’s definitely something I want to look into.”

“The best way to describe the program is that we wanted to find a way to reward students for doing good things and making good choices,” Duncan said in quotes provided by the Spurs. “All of the qualities that go into being a good person. We think that by recognizing those who have these values, we can encourage more students to actively think about demonstrating strong character on a daily basis.”

Over 3,000 Bexar County students are awarded each season with various prizes, but it’s the season tickets that go to those who are most representative of the program.

Kids from local community groups and schools receive 100 tickets for each Nets home game thanks to Williams. He purchased the tickets, which are located in sections 106 and 107 at Prudential Center in Newark, just to do the right thing.

“You’re supposed to give other kids the opportunity to go to a game,” Williams wrote in an e-mail. Many of [the kids] wouldn’t have the chance to see pro athletes in person without this program. I think it’s part of the rulebook, the unwritten rulebook, as somebody that comes from nothing and made it, to do something.”

His ticket giveaway is part of the Nets’ team-wide Athlete Assist program, in which players offer tickets to fans. Williams gets to spend some time with kids pre-game, and he hopes to continue the goodwill throughout the season. “I’m going do to a Thanksgiving event, I want to do a Christmas event where you give away toys and stuff like that,” Williams wrote. “That’s all I’m trying to do — just show kids that there is a way for them to make it in any type of form or fashion.”

Andray Blatche, Washington Wizards: Blatche’s Bunch
The third-year forward will give 20 tickets per game for 20 Wizards home games this season. The recipients are various local children’s charities, and Blatche is more than happy to give kids an opportunity to see the Wizards play. “I want to give them the opportunity to come to the game and have a chance to have fun,” Blatche said by phone after a recent Wizards practice. “It’s about trying to create a positive vibe in [Washington] D.C.”

He meets with the children before games, signs autographs and takes pictures. “I like to see people happy, laugh, have a good time,” Blatche emphasized. “I try to help in any way I can.”

“I am very proud to be able to help children and families who are going through difficult times by bringing them to a Kings game,” Evans said in a quote provided by the Kings. “It’s exciting to see them in the box cheering on the Kings.”

Houston Rockets
A multitude of player programs run under the Rockets for Youth umbrella, which gives away 181 tickets per home game, or 7,964 total for this season, including preseason games. Charities which serve disadvantaged youth, such as the Boys & Girls Club, receive tickets to the Upper Level at Toyota Center.

Lopez purchased 10 tickets for 20 Suns home games while every other player purchased 10 tickets for each home contest. All tickets go to non-profit organizations located in Arizona. The team created a page on their website where non-profits can apply online for a game in one of the player sections. Most of Lopez’s tickets go to Big Brothers/Big Sisters of Central Arizona given his support of the Big Brother/Big Sisters program.

Memphis Grizzlies
The season began with Marc Gasol purchasing and giving away 500 tickets to fans on Opening Night to celebrate the Grizzlies’ 10th anniversary in Memphis.

On a separate note, the team’s Tickets For Kids program donates 10 to 20 tickets for each home game to kids in various Mid-South located charities. The program began for the 2001-02 campaign, and 20,000-plus tickets were donated last year. Players who participate in the program include O.J. Mayo, Rudy Gay, Zach Randolph, Gasol, Mike Conley, Tony Allen, Hasheem Thabeet, Acie Law, DeMarre Carroll and Darrell Arthur.