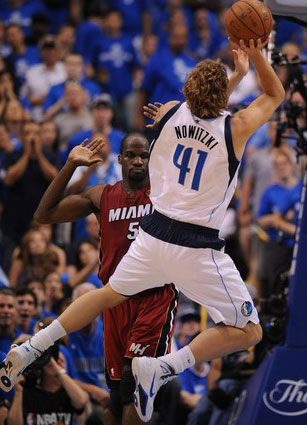 One thing was certain last night: if Dallas had any realistic chance of winning the series, they would have to tie it up on their home floor. Throughout all the madness—the hard fouls, wild shots, intense trash talking—the rest of the NBA took to Twitter to air their thoughts. Some rooted for the Heat; others hoped for Dirk & Co. to hold down home-court and tie the series. Some asked LeBron James to take more shots, and almost everyone was in awe of Dwyane Wade. But as usual in a Mavericks win, [an ailing] Dirk Nowitzki had the last laugh, willing his team to victory in the fourth quarter. Peep the full Game 4 NBA Twitter reactions below, from the opening tip all the way through the final buzzer.