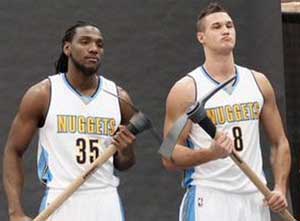 The 2015-2016 year kicked off with Media Day yesterday, as NBA players looked into a bunch of Twitter mirrors, posted group selfies, and posed with props. The season is just around the corner so everyone is hyped, and rightfully so. Last year’s MVP Stephen Curry showed off some familiar moves:

A lot of phones and cameras pointed in direction of @StephenCurry30 here at #GSWMediaDay. https://t.co/va7mQ52UBg

Check out what some more NBA players (and teams) had to say during Monday’s Media Day by scrolling through the tweets up top.