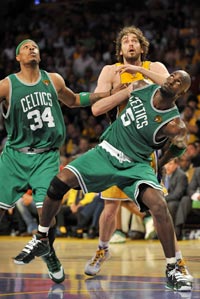 That the Lakers and Celtics stretched the NBA Finals to seven games could end up helping teams sign the free agents that they’re pursuing.

This past NBA postseason lasted 82 games, which fell three games short of the average length of the playoffs since the League expanded to a seven-game format in the first round in 2003. In that time, the range of overall playoff games lasted from 79 (2007) to 89 (2006) contests and the average number of games has been 85. The significance of the 2010 playoffs lasting fewer games than on average could lower the amount of money available to teams in free agency, as was first written by Larry Coon on his Off The Dribble blog for The New York Times.

NBA Commissioner David Stern projected in April that the League’s ’10-11 salary cap would be roughly $56.1 million. An exact number isn’t expected until July 7.

Coon wrote in a late May post that a shorter playoff season translates into less basketball-related income (BRI), which would lower each team’s salary cap figure versus the $56.1 million projection. Here is how that would work.

According to a league executive Coon spoke with, each playoff game can generate $500,000-$2.5 million per game. The precise figure is difficult to find, but there are a couple variables as to how much revenue comes in: the number of playoff games played and which teams are playing.

Let’s start with the number of games played. Assuming Stern based his salary cap projection with the average number of playoff games  (85) in mind, and takin

g a worst-case scenario in which $2.5 million in revenue is lost for each game short of the average, three fewer games this past postseason would mean $7.5 million less revenue than what Stern might have expected.

Take that $7.5 million figure, carve out 51 percent of it (that’s the percentage of BRI that determines the salary cap) and then divide that by 30 teams. That could mean, in a worst-case scenario, that the salary cap could be $127,500 less than the $56.1 million projection. Yet it could have been worse had the Lakers and Celtics not stretched their series to legendary proportions.

When Coon wrote his post in May, it looked as if the playoffs could have realistically ended in 80 games. That five-game short on the average would have meant potentially as much as $12.5 million less revenue than what would have been generated by an 85-game postseason. That meant the salary cap could have been $212,500 less than what was expected.

While that or the $127,500 figure don’t appear to represent a huge difference given the tens of millions that teams play with, it’s apparent how far teams like the Nets or Bulls have gone to drop every cent they can from their payroll.

The revenue generated from which teams are playing is even less clear. But it is safe to assume that the NBA is grateful that the Lakers and Celtics made it to the Finals. Both teams can charge more money for home playoff games than most others, especially the Lakers.

According to seatgeek.com, the average transacted ticket price for a Lakers ticket during the 2009-10 regular season was $124, the highest of any other team by $29. The Celtics tied for fifth with an average ticket price of $74.

As for the Suns and the Magic, the two Conference Finals losers? The Suns actually ranked fourth at $76, although that’s $48 less than what the Lakers charged per average ticket. And in a nod perhaps to the Lakers’ income generating power, that $48 difference is more than what the Magic charged for an average ticket, which came out to $44, the eight-lowest average ticket price of any NBA team.

One more thing. A chunk of BRI that doesn’t change based on the number of playoff games or which teams are playing is TV revenue. It’s a hefty percentage of BRI and it’s one guaranteed form of revenue no matter what happens.

I asked Coon about which free agent — restricted or unrestricted — could benefit the most financially from the reams of salary cap space teams have accumulated.

“Rudy Gay is going to be the biggest beneficiary of the free agent market,” Coon said in a phone conversation. “It’s a seller’s market. There are enough teams with salary cap space and there are max players. Rudy Gay is one of the players next down the line.”

Gay is a restricted free agent, which means any team other than the Grizzlies can offer him a contract in the form of an offer sheet. Once that’s made, the Griz have seven days to match that offer sheet and if they opt not to, then the offer sheet becomes an official contract with the offering team. How does Rudy look in Clipper blue and red?

Speaking of the Clippers, I asked Coon about how they could fare long-term. There’s a stigma that they’re a floundering franchise with no direction despite their bevy of talent on the roster. Not true, said Coon.

“They’re making money and are one of the few teams that are,” Coon said. “They’re prudent financially. Say what you want about Donald Sterling — he has his faults and they do some dumb things. But they’re pretty financially responsible.

They’re in a good spot in Staples [Center] where they make money. I think they’ll continue to do fine, especially since the next CBA (Collective Bargaining Agreement) will probably tilt things more in the owners’ favor.”

On one more L.A.-related topic, I asked Coon in a follow-up e-mail message about whether the Lakers could apply for insurance coverage to pay for Luke Walton’s $5.26 million salary next season if his ailing back prevents him from playing. Lakers general manager Mitch Kupchak stated recently in The Los Angeles Times that he wasn’t sure what Walton’s long-term status would be.

Coon cited two issues related to insurance coverage, starting if he is even covered by the League.

“One-hundred fifty players in the League are covered under the policy, and generally that’s the five most expensive contracts for each team,” Coon wrote. “On the Lakers, the five most expensive contracts are Kobe, Pau, Bynum, Odom and Artest. But whether you’re in the top five doesn’t necessarily mean you’re covered or not covered — the team can take out extra coverage on additional players, and the carrier can pick 14 contracts league-wide to exclude.”

He also brought up a second point.

“If he is covered, then there’s a 41-game waiting period before coverage can kick in. So if he misses the first 41 games of next season, the Lakers can file a claim and have insurance pay 80% of his guaranteed base salary for any additional games he misses.”

There’s something to think about this summer if your favorite team has a player whose broken-down body might force him to the bench.