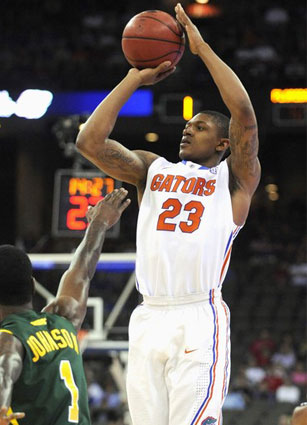 Brad Beal did about all a player could at the high school level. He won a state title, took home the crown at Nike’s biggest AAU tournament (Nike Peach Jam), and was named MVP while leading the USA to a gold medal at the U17 World Championships. With a résumé like that, it’s easy to see why expectations were sky high when he landed on campus in Gainesville, FL.

In his lone season at Florida, he led the team to within a game of the Final Four. As the season went on, Beal’s responsibility went up as did his productivity. He scored 13 or more points in 16 of his last 17 games, and even though he initially started off the season as a 6-4 small forward, there were times that the emerging freshman was running the show at season’s end. Beal knows that it was all a gradual state of progression.

“Toward the end of the year, Coach Donovan let me play the point more often. A lot more plays were ran through me creating off of the dribble and creating for my teammates,” he responded, when asked about playing with two primary ball handlers in Erving Walker and Kenny Boynton. “At the beginning of the year, my handle wasn’t that good but I stayed in the gym. By the end of the year, Coach Donovan had the confidence in me to be able to create for the team.”

The aforementioned confidence that Beal spoke of was evident in his play and put him in the position to play for a decent amount of money next season. He positioned himself to be one of the better shooters in the 2012 Draft class and the likely top 2-guard to come off the board. Still, there were questions surrounding his handle and ability to score on his own. Beal left for the League, but told SLAMonline he knew what he had to improve on before the Draft.

“I’m looking to really focus on creating my own shot offensively,” Beal said. “Just beating guys off of the dribble, then finishing with a floater or pull-up in the lane. Just have to continue having high IQ for the game, focus in on ball handling, and work on creating more space off the dribble.”

Signing with Mark Bartelstein of Priority Sports, a Chicago-based agency, the Windy City seemed to be the most fitting destination. The next step was to find the right trainer, and that was Josh Oppenheimer. A former college coach, Oppenheimer now runs Excel Basketball and has worked with well over 20 NBA payers. I personally worked under Oppenheimer for a year, and can testify to the wealth of knowledge that I learned in such a short time.

The gym, located in the heart of downtown Chicago on UIC’s campus, was loaded with college stars and current pros. Utah Jazz rookie Enes Kanter and former Duke star Jon Scheyer joined 10 players looking to hone their skills in preparation for the NBA Draft. Oppenheimer’s strength guy, Ryan Thompson, got the guys started off with a series of stretches and plyometrics to get loose. A former NFL Draft training expert, Thompson really spent a great deal of time focusing on footwork and then the tests that the players would endure in early June’s NBA Draft Combine. The cone drill and three-quarter-court sprint were just a few drills that Thompson prepped his pupils for, considering that their final exam was two weeks away.

Once the balls actually hit the deck, Oppenheimer started the group out with some ball handling drills. Having double the players he usually does in the gym at one time, things were a bit congested, but the intensity was sky high. Starting off with two balls before shifting to one and zig-zagging through cones, Beal showed a tighter handle than during his high school years.

Beal told SLAMonline that the most important thing that Oppenheimer taught him was to “make everything realistic” and a “game-like situation.” Opp himself had no problem stopping the drills and letting them know that half speed will get them nowhere… and they listened when the action picked up.

When they were done handling the rock, the players broke up into groups of three for shooting drills. The dudes went through a series of Js after performing a variety of moves ranging from crossovers, to step-backs, to inside outs. Beal thrived, making all of his step-backs from the left side of the court. Paired with Jon Scheyer and Dee Bost (who we’ll profile in the coming weeks), the trio put on a shooting clinic that any hoops enthusiast could enjoy. Beal straight shot the lights out from both the collegiate and NBA three-point line, which was to be expected. What wasn’t to be expected was just how easy it was.

“Brad shoots it like an NBA player already,” an enthusiastic Oppenheimer elated after Beal shot the lights out in the drills. “I’ve worked with a lot of guys and you always hear, ‘This guy can really shoot.’ Well, Brad can really, really shoot. I think that he has the potential to develop into a Ray Allen-type shooter.”

What impressed me even more than his ability to shoot the rock was the potential No. 2 pick’s coachability and desire to learn. On one particular instance, Opp was having Beal call for ball screens on the wing going toward the middle of the floor, only to spin away from the pick for a pull-up going toward the baseline. With trainer stopping the drill to make correction, Beal quickly interjected, “I know, going too wide with my dribble and not quite to the rim.” Opp responded, “Exactly,” then echoed my thoughts when pressed on what it was like to work with Beal.

“It’s up to him how good he becomes,” Oppenheimer explained. “He’s very coachable, very open to small corrections. I try to explain to him that there’s a difference between criticizing and coaching, and I try to coach him. He’s been unbelievable to work with.”

This week’s NBA Draft Lottery will give fans, scouts, and Beal himself a better feel as to where he’s going to land. Most have him pegged as the top 2-guard in the Draft and a guy who could potentially land anywhere from No. 2 to 6. The questions still remain about Beal’s ability to create off the dribble, but I feel that those questions will be answered in workouts. Beal and Oppenheimer assured me that they will and should be gunnin’ for that No. 2 spot.

“I believe that I’m going to surprise teams because the main focus of my whole pre-Draft workout has been my ball handling,” a confident Beal said. “They say that I’m a little undersized for 2-guard, so I may have to play some point guard eventually. I think that a lot of teams are going to be shocked by my ball handling.”

Oppenheimer added, “Everyone knows that Brad can shoot the ball, but there’s a difference between a great college shooter and a great NBA shooter. He’s making that transition, especially with the three-point line. He’s a lot better at getting shots off of the dribble than people think. They had primary ball handlers in Walker and Boynton at Florida, but he’s very good at initial attack moves and combination moves. Of course, we’re working on pick-and-roll stuff, pin downs, and all that stuff because he’s a guy that we know can eventually play both spots in the League.”