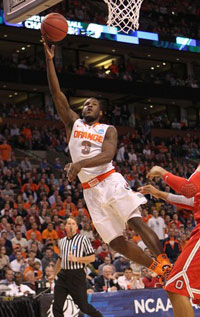 For Dion Waiters, everything that the game has had to offer him has been a learning process. From the streets of Philly, to South Kent, to Life Center Academy, to Syracuse… he’s added something new to make himself better either on or off the court. That has continued at Impact Academy in Las Vegas.

“I’m just trying to get better every day out here,” said Waiters after a tough workout in the Vegas heat. “I’m working on every aspect of my game trying to propel it to the next level. I’m trying to get my jumpshot better and get in the best shape that I can.”

Having had the pleasure of watching him since he was a freshman in high school at South Kent in Connecticut, Waiters has been playing against fifth year guys since most of us were playing 14 year olds on the freshman level. After his first two high school seasons, he opted to transfer closer to home to Life Center Academy in New Jersey. Despite the fact that he played against such elite level talent, he rarely played in front of more than a few dozen fans… a far cry from the atmosphere he would have had in basketball-crazed Philadelphia.

“I missed out on the Philly pride, the talk, and all of the other things that go down when you play high school ball in the city,” the 20-year-old reflected. “It’s the little things that you miss, but at the end of the day, things didn’t work out for me in the public schools so I had to go to prep school. “

After receiving just about every accolade that a high school player could, expectations were high for Dion as a freshman. Some felt that he had the potential to win Big East Freshman of the Year. He came off of the bench for the first time in years, scored a pedestrian 6 points per game, and butted heads with Coach Boehiem at times. Many assumed that Dion would either bounce to the League or transfer. Instead he stuck it out with the ‘Cuse and matured both as a player and as a man.

“As a freshman, I was just trying to get my feet wet. I caught myself pressing the issue at times instead of letting the game come to me, like I did this year,” he explained of his debut season. “At the end of the day, I wasn’t a starter for two years and although I wanted to be, I had to do what was best for the team.”

New season, new beginning for Waiters. He still came off of the bench for the Orangemen, but was their best player. His 12.6 ppg didn’t come close to portraying the impact that he had on the team. But there was still controversy. Longtime assistant Bernie Fine, who had really helped Waiters with his maturity, was fired amid allegations of sexual abuse with minors. Instead of crumbling, ‘Cuse and Waiters continued to thrive.

“It was hard. At the end of the day, you never expect to hear something like that about someone that you’ve known for years. We couldn’t control anything that was going on and it was shocking to us too,” expressed the openly honest combo guard about the reports of Fine’s molestation. “Every time I got down on myself when shots weren’t going in, he’d (Coach Fine) always tell me not to get down on myself and was a positive motivator. That’s what he really helped with.”

With the season over and the opportunity to enter the Draft available, Waiters pursued his lifelong dream and submitted his name. Even though he never started a game for the Big East power, he learned invaluable lessons in his two years in college.

“The most important thing I gained from my college experience is that I’ve become a better person and a better player, both on and off the court,” a humbled Waiters reflected. “You learn a lot from the coaches when you actually sit back, shut your mouth, and listen. Once I did that, I really learned a lot.”

Carrying over a similar mentality, Waiters did the same thing at Impact. He came into Las Vegas a little overweight, changed his diet immediately, and lost 17 pounds in a month in a half while trimming his body fat. He didn’t miss one single workout in the week that I was out in Vegas, which is both a testament to his work ethic and how much he believed in what Impact could do for him. Waiters showed effortless range that extended beyond the NBA three-point arc and was a top-three shooter of the group they had in Vegas. The improved range was something that he mentioned he was really focusing on, but it was the fluidity and ease that he shot it with that was most impressive.

Once the action starting to go into live three-on-three and five-on-five, that was where Waiters really left his imprint. He was the best shot creator of the group and routinely embarrassed the unnamed defender who guarded him for the majority of the day. The hesitation and shifty style that he played with was quite reminiscent of fellow Philly guard Tyreke Evans, who coincidentally also trained with Philly trainer Lamont Peterson as a youngster. Mix in Dion’s ability to utilize his jab step so well and it’s easy to see why he was such a problem to guard before even putting the ball on the deck.

In one of the ever-so-famous Draft day dramas, it appears that Waiters is the most highly touted player in the Draft to receive a promise. He shut down all workouts and did not even interview with teams at the NBA Draft Combine in early June in Chicago. Since then, mum’s been the word on Waiters.

Word on the street is that Phoenix made him a promise at 13, but even they haven’t worked him out; Only the Raptors have at 8. Either way, Waiters feels that the team that selects him isn’t going to be picking him for how well he can score the ball or shoot it from NBA three. He says he’s getting drafted because of his killer mentality.

“I’m a winner, hard worker, and I’m a competitor. I’m coming for the number one spot and by that, I mean that I’m going to make the guy in front of me work that much harder,” he confidently said at the end of our time in Vegas. “I’m just trying to get the best out of myself, play every game like it’s my last, and prove that I’m a champion.”