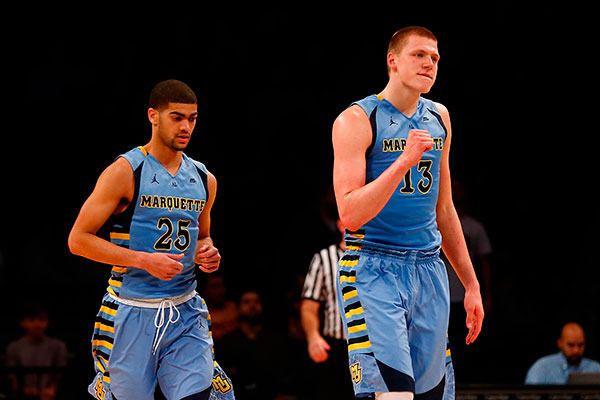 For Henry Ellenson, it has all been a dream. Growing up in Rice Lake, Wisconsin (pop. 8,438), he was nurtured with the small town values that many strive for. However, he grew to 6-11, quickly became one of the most highly-touted high school prospects in the country, played his lone year of college ball at Marquette, and is now a potential NBA Draft lottery pick.

Since signing with Jay Z’s Roc Nation agency, Ellenson has spent the bulk of his time in NYC and LA, which has been a culture shock to say the least. “LA and New York are way different from Rice Lake, that’s for sure,” Ellenson says after a workout on UCLA’s campus. “I’m just adjusting to the big city and getting used to traffic because you don’t get that much on Main Street back home.”

Putting in work with trainers Travelle Gaines and Chris Johnson, Henry looks to encompass all facets of pre-draft training. Gaines is the expert in the strength and explosion department, while Johnson handles all of the work with the pill. Both work with Chicago Bulls star Jimmy Butler year round and saw the immense potential in their 19-year-old pupil.

“I’ve had an opportunity to work with different NBA pros such as Tristan Thompson, Big Baby, and Tobias Harris. They’re in the league doing extremely well,” Johnson says post-workout. “One of the skill sets that Henry has that sets him apart from those guys is that he’s a tremendous shooter. To me, he is going to be a modern day Dirk Nowitzki or maybe Keith Van Horn. He has those types of skills that separate him from everyone in this Draft.”

On the floor, it was clear that Henry’s trainers are trying to mold him into a hybrid Dirk. They spent a ton of time doing work out of the mid-post to utilize the size advantage that Ellenson will have over most forwards. There were no shortage of Dirk/KD-esque one-legged fadeaways and it was crazy to see the amount of separation that he was able to create. Gaines made it a focus to get Henry to work on dropping his hips, while Johnson was a tactician teaching his understudy the essentials and tricks of proper footwork. After the workout, we got to see him practice his new skills—against an NBA All-Star.

Bulls swingman Jimmy Butler was in the City of Angels training with the duo and while he didn’t even have any basketball kicks with him, wanted to get in on the action with his fellow Marquette alum. The two played H-O-R-S-E and then even got in a heated game of one on one (which you’ll see tomorrow). We won’t say who won just yet, but it was clear that it was an invaluable experience for Ellenson.

“Jimmy has been great,” says Henry after their battle. “Being able to talk to a fellow Marquette guy about the NBA, learning things about the physicality, and how teams will play you. He teaches me about a lot of off the court stuff, too.”

With the Draft two weeks away, Henry’s stock is all over the lottery. After Ben Simmons and Brandon Ingram come off the board, it’s anyone’s guess. He could find himself as high as No. 3 to the Celtics, but is also willing to work out for teams towards the back half of the top ten.

At 6-foot-11, Henry is insanely coordinated and shoots the ball much better than his stats from Marquette reflect, especially from the NBA 3-point line. While there is a lot of uncertainty, Ellenson really seems to be enjoying the process.

“It’s a crazy process to go through to be going to the NBA Draft, the Combine, the lottery, and then trying to work out for teams,” the soft-spoken freshman admits. “I’m just a kid from Rice Lake trying to live out his dreams and it’s been a fun process for sure.”