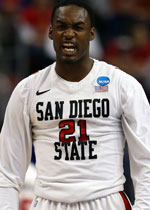 NR. The abbreviation for “Not Ranked” used by most recruiting services was what Jamaal Franklin was used to seeing next to his name coming out of high school. Not only did he see “NR” after finishing up his senior season at Serrano (CA) HS, but then again after his post-grad year at Westwind Academy in Phoenix. Three years later, he’s worked himself into the first round of the NBA Draft.

“I think it has a lot to do with where I played high school at in the high desert. I wasn’t getting that much interest from colleges or as far as rankings,” he said. “My AAU team, California Supreme, was one of the top in the country, though. It didn’t really bother me because I knew at the end of the day, we’d all be on the court somehow, some way.”

Having scouted Jamaal since those days, it was always clear that he had NBA athleticism, but he didn’t have the game to match. He was very much a straight-line driver who thrived in transition. One thing was consistent about Franklin, though: He never stopped working. From high school to his prep school year, he made serious strides. From Westwind to San Diego State, he honed his jumper. Then at SDSU, he became Conference Player of the Year and solidified his status as a first-round pick. For him, the formula is pretty simple.

In the Mountain West Conference, Franklin thrived. After playing behind Kawhi Leonard, he was handed the keys as a sophomore. Then as a junior, he left no doubt in anyone’s mind that he was League-bound. As each season went on, he added more and more to his game. In his final college season at SDSU, he posted averages of 17 points, 9.5 rebounds and 3.3 assists per game from the off-guard position. With all of his accolades, there was still considerable room for growth. Some said his shot selection needed work. Some said he was selfish. Others said he couldn’t create his own shot. In Las Vegas, he gave us a glimpse at much more than he showed at San Diego State.

Franklin really surprised everyone in the gym with the ease in which he shot the NBA three-pointer. He was remarkably consistent from not just the deeper line from the League, but also from mid-range. He was straight-up automatic in live play, getting his jumper off no matter who was guarding him. The frequency in which the Inland Empire AAU product saw his shot drop was much higher than the 41 percent he shot from the field and 28 percent from three this season, something he thinks will pleasantly surprise teams.

“I think I’m really going to shock teams with how well I shoot the ball,” he noted.

Just as impressive as Franklin’s shooting was how he got his shots. He was outstanding coming off of pin-down screens, reading how the D was playing him and making the proper reads. The 2-guard was often able to get any shot that he wanted in the three-on-three and five-on-five action and was still incredibly unselfish. He made some great decisions coming off of ball screens and distributed the pill better than most scorers. He’s the proud owner of a 6-11 wingspan and enjoys playing on the defensive end—making it easy to see why a buzz is building.

There are weaknesses, though. Some teams will want to see more proof of an improved jumper and shot selection. There were times last season in which Franklin took some questionable shots early in the clock when teammates had better opportunities, but as the best player in the conference, you have to do that at times. The ability to create his own shot, drive and potential to put the clamps on guys have put Franklin firmly in the first-round mix of next month’s Draft, though it’s clear he will not be content with where he’s at. Now or ever.

“I’ve always been a person to work hard and when you work hard, you get better,” the 6-5 wing mentioned after the workout at Impact Basketball in Las Vegas. “I’ve never been comfortable in what I’ve achieved or accomplished. I’ve always wanted to go higher, and higher and higher.”