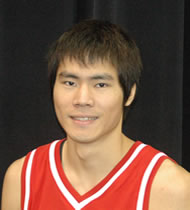 While checking out Terrence Ross and Arnett Moultrie in L.A., we were pleasantly surprised with the addition of a player that we had never seen (or heard of, for that matter) before. 6-5 Tsung-hsien Chang, more commonly known as “Jet”, matched up against Ross and showed that he could be the next Asian that you hear coming across your TV screen.

Starring at BYU-Hawaii, Chang had a storied career at the Division II-level. While leading his collegiate team to the D-2 Final Four in 2011, he put on two performances for the ages. In the semifinals, against West Liberty State, he dropped 43 points on a sizzling 14-17 from the field. In the finals, he hung 35 on Bellarmine University. While he came up short in the ‘ship, Chang firmly made his mark, and was the preseason pick for conference POY. After a strong senior campaign. the pride of Tainan, Taiwan, is the first Asian player ever to be invited to the Portsmouth Invitational Tournament for the nation’s top seniors.

The main thing that immediately caught our eye about Chang was his ability to shoot the NBA 3. Throughout the workout, he was right there with Ross (maybe even better) with his accuracy from deep. Not just a shooter from beyond the arc, Jet showed off great form and similar results from mid-range, both spotting up or shooting off the dribble. Chang also surprised onlookers with his athleticism when he threw down some powerful dunks in the drill session.

The biggest concerns about Chang center around his defense and ability to handle the ball. The first question could not be answered in a workout like this, since there wasn’t any live one-on-one action. As for his handle, Jet definitely could use some tightening up if he expects to go up against 6-8 wings with near 7-foot wingspans, the kind that just about every NBA team is equipped with.

Sitting at No. 84 in Chad Ford’s Top 100 Prospects for ESPN, Chang appears to be a guy who is on the outside looking in when it comes to being drafted. He’s destined to get plenty of workouts based on his big-time college career and ability to shoot the NBA 3. His ability to handle the rock and defend NBA caliber wings will ultimately determine his chances of making a roster. Regardless of the outcome, Jet Chang will do everything in his power to put Taiwan on the basketball map.