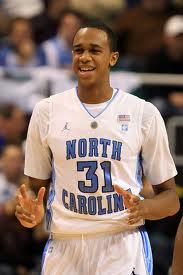 Though Anthony Davis has been the primary story of the Draft with his massive eight-inch growth spurt during his junior year, many fans don’t realize that UNC junior John Henson wasn’t too far off. He went grew six inches in a year and went from just your normal high school player in any city to a buzzing name amongst recruiting circles.

John sprouted from 6-2 to 6-8 in between his freshman and sophomore years,” Henson’s old AAU coach Max Ivany told us. “He was all knock kneed and smiles as he rose from obscurity at the Arizona Cactus Classic where I literally begged Sherman Dillard (Nike’s former Grassroots Camps Director) to look at John and fellow 6-8 bookend Cory Jefferson (Baylor) for an opportunity at the Nike Skills Academy. Dillard gave them their shot and along with his performance in Tucson and then at the Jayhawk Invitational in Lawrence, KS he quickly blew up. As John grew in stature and status he never changed the way he acted towards others either.”

While the buzz began when he was in Round Rock, Texas playing for the D-1 Ambassadors, it only grew when his family moved to Tampa, Florida for his senior season. Henson flourished and was considered by some to be the top power forward in the country. While he was still raw offensively, he managed to post averages of 17 points, 12 rebounds, and 6 blocks per game as a senior. The defensive dominance that he showed was enough to get him selected to the McDonald’s All-America Game and earn him a scholarship to North Carolina.

Henson’s role changed quite a bit over his tenure at UNC. Initially, they started him off at the small forward position due to his comfort to play facing the basket. It was clear that while he had some skills on the wing, he wasn’t ready to play the perimeter full time for one of the better programs in the country. From the midway point of his freshman season until the conclusion of his career as a Tar Heel, he played the 4-spot and flourished. The two-time ACC Defensive Player of The Year established himself as the best defender in the country not named Anthony Davis and his offensive game continued to develop.  Though he had the chance to bounce to the league after his sophomore year, the 21-year-old surprised many by returning to UNC and bulking up to 220 for what would be his final season in Chapel Hill.

This takes us back to his Texas roots, where he spent training in Houston with John Lucas Basketball Resources. It was here that he showed the ability to become a viable threat in the pick-and-roll, both diving to the basket and as a threat to pop. The raw ability to shoot the ball had been there in the big man for years (because why else would Roy have stuck him at the 3?), but it just took a lot of reps and refinement to get it to the point that it could be a consistent weapon. Along with his defense, his jumpshot has been one of the things that really have teams buzzing about his long term potential.

“John has really improved his jump shot since he’s been working with us,” Lucas’ right hand man Brian Merritt adamantly told SLAM. “He has also shown the ability to switch and contain perimeter guys in pick and roll situations. He has scary length and ability that’s only beginning to be tapped.”

Some of the aforementioned ability that has only begun to be tapped is Henson’s back to the basket game. A natural righty, he is like Dwight Howard in that he almost seems more comfortable shooting jump hooks with his left hand. There has also been some intriguing footwork that has been shown in flashes that leads you to believe that he’s not as far away from being an offensive threat as some may seem. The more we watched him, the more we realized that he’s a whole lot better than your typical 13 point per game scorer on O.

Henson, who was picked 14th by the Milwaukee Bucks in Thursday night’s Draft, solidified himself due to his defensive dominance and intriguing offensive potential. Ivany tells us that the Bucks will be getting just as good of a person as they will a player.

“John is the product of an educated family who are genuinely nice people. Apples do not fall far from the tree,” he said. “His dad (Matt, who played at Norfolk State) knew his son was something special but never filled his head with nonsense, which I think was the main attraction to him breaking through on the circuit with the Texas D1 Ambassadors.”