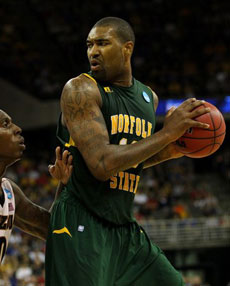 Coming off of a remarkable NCAA Tournament that left tiny Norfolk State as the victors over highly ranked Missouri [whom many had picked to make the Final Four], reality has finally set in for Kyle O’Quinn. After his 26 point, 14 rebound performance against the Tigers, O’Quinn became a household name during State’s March Madness run. Many only know him for that game and not for the work that he put in in throughout the four years preceding that, but that doesn’t bother Kyle one bit.

“No, it doesn’t bother me at all. Everyone has to find their niche that sticks to the public,” he told us. “I put a lot of work in during my four years at Norfolk State. Hey, if they want to remember that game, let them remember it. At least they remember me and Norfolk State”

“We couldn’t stop looking at ESPN after the win,” he threw in with an infectious smile. “We all kept comparing tweets and comparing text messages. It was the highest point of my basketball career and for it to be at the very end, it puts the final stamp on all of the hard work that my teammates and I put in.”

The work that he was referring to was the transformation that he made from under-recruited big man out of Campus Magnet HS in Queens that all of the city schools passed on, to sure fire NBA draftee on Thursday.

I first caught wind of O’Quinn when he had a promising sophomore year with averages of 11 points, 8 boards, and 2 blocks per game. Still, his offensive game was quite raw and he appeared to be a guy who was more destined to make a living in either Europe or the D-League. While many players from the MEAC would be thrilled to play basketball for money at any level, that wasn’t something that he was going to settle for. With the help of Norfolk State assistant coach Larry Vickers, O’Quinn took the necessary steps to get him ready for the next level.

“Coach Larry Vickers played four years at the school and had just got the job when I got there,” the truly grateful big man explained. “We had a tight bond because he played the same position that I did. Needless to say, he’s finishing his career with me. We put a lot of time in the gym together with one-on-one moves, so I credit a lot of my offensive improvement to him.”

After winning MVP of the Portsmouth Invitational, we got the chance to catch up with O’Quinn at Impact Basketball in Las Vegas. Training alongside NBA hopefuls Mike Scott, Justin Hamilton, and Xavier Gibson down low really gave us a chance to see how he would fare against the NBA size that he didn’t usually face at Norfolk State. Another adjustment that he was going to have to get used to was going from focal point of his team’s offense to role player at the next level. He told us that he “was really excited to play with NBA caliber guards,” and that he “didn’t see those in his conference too often.”

While some players may have struggled with not getting the touches they were used to, O’Quinn actually thrived with his new found role up out in Vegas. He set outstanding screens, rebounded the ball out of his area, and ran the floor as if each possession were his last. An enigmatic personality, he had the ferocity to get the other players to step their game up as the vocal leader of the group, yet would also be the first to make them die laughing with a joke. Not just about fun and games, O’Quinn also established himself as the hardest worker of the group during his time in Sin City.

What really impressed me about O’Quinn’s on court game was his ability to shoot the ball facing the basket. Though he shoots more of a set shot, he has consistent range extending all the way out to the collegiate three-point line. He tells us that he’s planning on eventually expanding his range beyond the NBA line, which would make him an even more valuable commodity. Much like his jumper, the 22-year old continued to show improvement with his footwork in the pivot. These will never likely be the strongest points of his game, but it’s enlightening to see how much he improved in just one week when we were with him in Vegas.

At 6’10 with a 7’5 wingspan and monstrous hands, O’Quinn has the size to play either frontcourt position at the next level. With the constant improvement, level of production at the collegiate level, and high character, it’s easy to see why he’s been shooting up Draft boards over the last few weeks. He’s got an improved face-up jumper, rebounds the hell out of the ball, and is a proven shot blocker. There’s been some buzz around him in the late first round and if he falls to the second round, it’s unlikely that he makes it out of the top half. Pressed by SLAM about where he thought he was going to be picked, O’Quinn responded in only a way that he could.

“I’m hearing I’ll be drafted somewhere in the first two rounds. I just don’t want to slip into the third!”