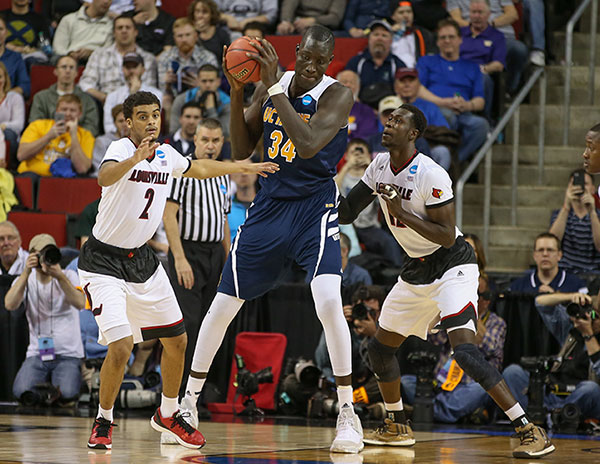 The 1990’s were the decade of giants in the NBA. Manute Bol, Gheorge Muresan, Mark Eaton, Rik Smits, Shawn Bradley, Chuck Nevitt, and Priest Lauderdale all stood 7-4 or taller and got burn in the League. Since then, only Yao Ming, Pavel Podkolzin, Slavko Vranes, and Sim Bhullar have hit an NBA floor at 7-4 or above.

Seven-foot-six Mamadou Ndiaye looks to add his name to that list.

A native of the Senegal, Ndiaye was actually an afterthought for many. Former Cleveland State player and D-1 assistant coach Amadou “Pape” Koundoul went back to his homeland to recruit other players and stumbled upon this giant.

“I was actually going back to see another big kid who wound up going to Boston College,” Koundoul tells SLAM. “Someone told me to go take a look at him and I had never seen an actual 7-6 kid before. I saw him practice and the one thing that he had was great hands. A lot of Senegalese kids don’t have great hands or awareness, and it was pretty amazing that he was so great catching the ball.”

Ndiaye started off of Stoneridge Prep (CA), which was home to Enes Kanter, Nikola Vucevic, and a flurry of other elite International players. Senegalese basketball icon Babacar Sy opened the pipeline to the Simi Valley, California school and it was there that Mamadou first set foot on the hardwood in the USA. From there, he transferred to Brethern Christian (CA) before ultimately spurning big time colleges to stay in SoCal and play at UC-Irvine. After three years of being the tallest player in the NCAA, it was time for Mamadou to bounce to the League.

We got a chance to evaluate Mamadou in the flesh at the Octagon Basketball pro day in LA. At 7-6 with an 8-3 wingspan, he has length that is unseen in the NBA. There were times in which he looked like he was playing on a 9-foot rim during the simulated pick and roll drills. Aside from his sheer size, the Senegalese big man showed off a surprising touch, drilling 11 straight J’s from mid-range at one point, evidence of the work that he’s been putting in as of late.

“My footwork and moving quickly,” Ndiaye says of the biggest improvements that he’s made in his game. “Blocking shots and shooting too. I’m getting better every time that I go to the gym. I’m working out every day, maybe twice a day.”

Though his skill level is improving, that is not what Mamadou Ndiaye’s NBA chances will hinge on. He has the potential to be a gamechanger on defense, even if only for 8-10 minutes a night. Mamadou’s consistently increasing agility and speed have helped him defend in space and while there will certainly be challenges guarding ball screens initially, many feel that there are ways to work around it.

Just as important of an asset as Ndiaye will be on the defensive side is the impact that he will have in the locker room, which is why many are confident that he’ll land on an NBA roster when it is all said and done.

“Mamadou is simply a great human being with a personality bigger than he is,” Koundoul says of his former pupil. “He is very smart and appreciates every opportunity that the game of basketball has given him.”