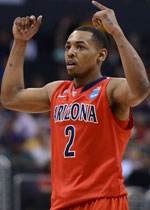 Mark Lyons has always been known to get buckets. From South Kent to Brewster to Xavier to Arizona, he put points on the board. He played alongside some great point guards, and he assumed the PG role himself this year. There were ups and downs, but the New York native believes he can facilitate an NBA offense.

“I think I did really well,” Lyons said of his first year running point at Arizona. “We were undefeated in non-conference, I was First-Team All-Pac-12, and we made it to the Sweet 16. I feel like I did a great job for my first year at a new school with a bunch of young guys.”

Running the 2 for his first three years at Xavier, Lyons graduated early and shot over to ‘Zona to play for his old coach, Sean Miller. He averaged a career high of 15.6 points while also posting career highs in field-goal and free-throw percentage. Still, there were some major adjustments that were to be made in his style of play. Instead of looking to create for himself like he was used to, he had to get everyone involved. Rather than put a team on his back by taking 20 shots, he was forced to create 20 assist opportunities. But his biggest obstacle came with distributing the rock to new clientele.

“The hardest part [about transitioning to point guard] for me was playing with a new team,” the 23-year-old said. “I had to build chemistry with a bunch of new guys. Personally, I thought I did well and the team did well.”

After winning the chip at the Portsmouth Invitational, Lyons took his talents to L.A. to work with Tyrell Jamerson. A former point guard himself at UNLV, Jamerson brought the experience that he gained playing in Vegas to the hardwood in Manhattan Beach. The lengthy session showcased not just Lyons’ ball handling, but left us thinking that we very well may have seen the most athletic point guard in the Draft.

Mark showed off a low, quick handle throughout the myriad of ball-handling drills. His ability to explode around screens and through the cones left you imagining what he could potentially do using the screen of a 260-pound center. Once he got going toward the rim, he threw down dunks that most other lead guards could only dream of putting down. Lyons shot the ball at around a 65 percent clip from the NBA three-point line and shot it at an even higher clip off of the bounce. What he’s really looking to improve on throughout his training doesn’t show up in the box score, though.

“I’m looking to work on my decision making and being more smooth,” he admitted. “Not going so fast, learning to change speeds, and becoming more of a crafty point guard.”

The questions about Mark’s potential at the next level never centered around his talent, but more so his transition to point guard. He’s never averaged more than 3.1 assists per game or posted an assist-to-turnover ratio higher than 3:2. There will certainly be an adjustment period for Mark running the show at the next level as he hopes to land on an NBA roster, but more than the elite athleticism and scoring talents he possesses, he believes that it will ultimately be his other intangibles that get him a spot in the League.

“I’m a winner. Everywhere I’ve went, I’ve won,” Lyons said. “High school, Xavier, Arizona, Portsmouth…I win. I know that I will bring my leadership and winning ways to a team.”