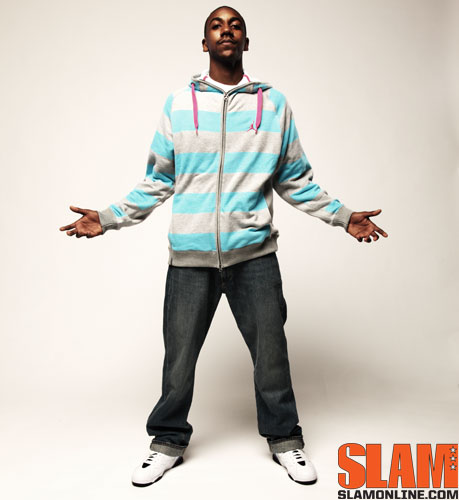 Rolling through the Midwest, we were fortunate enough to get a tip that Marquis Teague would be getting back to Indianapolis on Thursday after his debut NBA workout. Getting his feet wet in the workout process with the Cavs the day before, Jeff Teague’s baby brother was in the gym bright and early putting in work on his game. Teague’s agent, J.R. Hensley of ASM Sports, invited us to come check it out and the trek to ‘Nap Town was made.

A well-known commodity from the second he stepped foot in high school, Teague had a storied career at Pike HS and for Spiece on the AAU circuit before heading the UK as the consensus top point guard in the class, in addition to being a SLAM All-American. Expectations were incredibly high for him and after starting the season off slow, he bounced back to form, especially in the NCAA tournament. We all know Kentucky won the ‘ship, but many don’t understand how well Teague played as the catalyst to the team. His impact went far beyond the 10 points and 4.8 assists per game that he averaged, and as his comfortability grew, his productivity did too.

“I just stayed confident throughout the entire season and did whatever Coach Cal wanted me to do. He wanted me to get my teammates a lot more involved than he wanted me to score, which was something I had done my entire career,” Teague explained about his lone season in Lexington. “It was definitely an adjustment, but I just had to pick and choose when to make a play for myself and when to make one for my teammates.”

Teague’s decision to leave UK didn’t come without criticism, though. Many observers felt that he needed another year of experience running the helm and needed to improve on his decision making. Another elite recruiting class was soon to be in the fold and with him driving the car, they would have been the favorites for yet another title. Still, at just a hair over 19 years old, Marquis knew he was ready.

With both feet in the Draft, it was time for him to start fine-tuning his skills. This is where Shon Bolden comes in. A renowned trainer throughout the state of Indiana, Bolden has trained guys such as George Hill, Eric Gordon, Fred Jones, and Marquis’ brother Jeff over the years. Owner of Living Empowered Sports, he is one of the rare trainers that is able to do both on court and strength and conditioning work himself. For the time being, Shon has added a helper: Former client and NBA dunk contest winner Fred Jones.

The dynamic duo of Bolden and Jones put their star pupil through a rigorous workout that encompassed both skill work and conditioning. They started things off with a number of ball handling drills that also required Teague to do pushups with one hand on the basketball, and you could see Teague’s strength with how effortlessly he pounded the ball into the ground and then dropped down for the unusual push-ups. What followed were two more drills that incorporated both basketball and conditioning; Teague went through a series of full court layup drills in which he really focused on left hand work, then went into a series of defensive slides, NBA 3s, and pull-up jumpers. It was immediately evident throughout the process how much of a physical marvel that Teague was for even completing this grueling part of the workout. He told us that he’s trying to stay “in game shape,” and based on the workouts, seems to be doing quite the job.

The rest of the workout was primarily shooting drills, though with a high enough intensity to keep Marquis’ heart rate up. There were drills where he did defensive slides to the corner, then spotted up for an NBA 3-pointer. There were some where he sprinted from one baseline, caught the ball around half court, then pulled up from the college 3. There were full-court sprints where he had to stop, gather his feet, and shoot on the dime. For a guy who supposedly “can’t shoot,” there were impressive results. Occasionally he shot the ball a little flat footed, but when he got his legs under him and got some lift, the results were very good. Teague told us that he’s “really been focusing on his NBA 3” and Bolden co-signed.

“We’re really working on his shot,” he said when asked what the focus of the pre-draft training was.  “Marquis has a lot of the offensive tools that we’ve been working on with him on since the third grade, and now he needs to be able to  make shots when people back up on him.”

Teague’s shot and defensive consistency are two areas of his game that many have questioned. Based on the workout, teams can rest a little easier about their concerns. While he’s not going to be a 40 percent 3-point shooter from day one, the Indianapolis native also is going to be able to keep you honest. He looks a lot better shooting the ball off of the dribble than from a stand-still, getting more lift and better results. And though he’s not a lock-down defender quite yet, the tools are there with his 6-2 height and 6-6 wingspan.

“I need to take pride in my defense and go out and defend every game,” Teague openingly admitted. “I know at that level you have to come out and be ready, or you’ll get dominated. I’m ready to work hard on my D.”

It’s not going to be defense or 3-point shooting that get Marquis Teague drafted, though. Teams ranging from the late lottery to early twenties will be taking a look at him because of his combination of explosiveness, size, and natural ability to score the ball. Truthfully, it’s not your usual explosiveness that you see in a guy with his first step or lateral movement. It’s something completely different.

“He has an unusual quickness. I don’t know how to put it because it seems sort of lazy, but then is amazingly explosive,” Bolden told us. “He can put you to sleep, freeze you, then take off. That’s a gift that he’s had since he was younger and he’s perfected it.”

Fred Jones added that Teague’s “his speed and quickness aren’t something that you see every day. He’s bulked up a bit, but he’s still able to be really quick and easy on his feet.”

While anyone who has watched an NBA game in their life can tell that Teague is on another planet athletically, Bolden was adamant in telling us that it’s something else that will make him a stud at the next level: His relentless mentality for a player so young.

“What impresses me most  about Marquis is his will and determination to win. He’s really competitive. I’ve been dealing with his brother Jeff, Eric Gordon, George Hill, and guys like that ever since he was younger so when he feels like he can compete with them, he can compete against anyone. I feel that the same thing he has that an Eric Gordon, a Jeff Teague and a George Hill [has] is that killer mentality to win.”