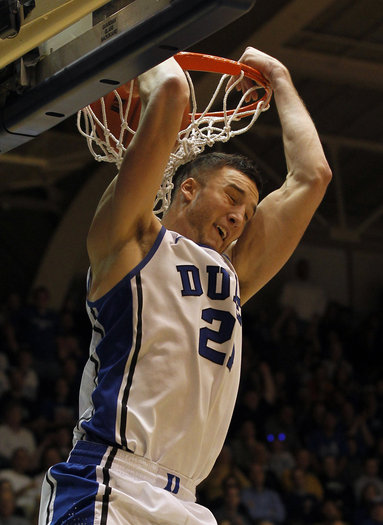 Miles Plumlee was an enigma throughout his four years at Duke. A 7-0 who could get his head at rim level, he often was forced to play second fiddle to the countless pros that came in and out of Durham during his tenure. Relegated to the role of enforcer inside, Plumlee did what was asked of him by his team and wound up having a productive career.

There were flashes of brilliance, though. Miles averaged 7 rebounds in just over 20 minutes per game. Even more impressively, three of those boards were snagged on the offensive end. The Indiana native took just 4.3 shots per game with the majority coming around the rim, but did give onlookers a glimpse of what he had to offer by hitting an occasional jumper facing the basket. Now that his role as  Blue Devil has been fulfilled, Plumlee has the opportunity to show teams what they may not necessarily have seen at Duke.

Early in the workout, one thing that was most surprising about Plumlee was his ability to handle the rock. The control that he showed throughout the two-ball work was better than a lot of the wings in the group. Of course we aren’t going to be seeing Plumlee starting the break like Lamar Odom but it’s still good to see the type of control he has with the rock.

Transitioning over to the shooting drills, Plumlee showed surprising range that you didn’t see too often at Duke. He looked comfortable in pick and pop situations, quickly grasping how to pivot to open the ball and how to time things out after setting a screen. It was really impressive stuff that you don’t see too often out of a 7-footer who averaged just six points per game as a senior. Early on in the workout, it was evident you have to dig deeper than the box score with Plumlee.

“His skill level is a little better than people think, not because they didn’t do a good job at Duke, because they really did a great job there,” said Josh Oppenheimer, former college coach and current trainer at Excel Basketball. “At Duke they’re playing to win National Championships and he had to do what they asked him to do. He definitely has a little bit more range on his shot than people think.”

A few of the questions that teams will have about Plumlee is that if he really is so talented, why didn’t he play more for Coach K? Also, how could one of the most athletic centers in the country who runs and jumps so well not even average 1 block per game? Answers to both of these couldn’t be received from a workout, but will certainly come to light during interviews with potential teams.

With the Draft now less than a month away and the draft order now set, things should get even crazier for potential second round picks like Plumlee. Given the lack of true centers in this Draft, he’ll be living wheels up from coast to coast for workouts. Ultimately, it’s going to come down to a team believing that Plumlee’s upside is enough to warrant a second round pick, something that Oppenheimer and I both believe will happen, especially if he can show his offensive skills.

“He’s got to make shots. If he can get into workouts and show that he can pick and pop, spread the floor, pull a little bit, he’s going to be a guy who gets a look without as many true centers in the league,” Oppenheimer said with a sense of confidence in his voice. “When he goes into workouts in great shape and shows teams he has a motor, he’ll be fine. The shot-blocking, the running, the athleticism will all be apparent. If he can make some shots too, he’ll really move up in the Draft.”