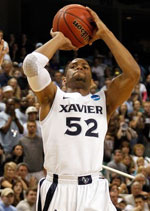 Another one of the late arrivals to Impact Basketball was Xavier point guard Tu Holloway. Arriving with Maalik Wayns late on Friday night, one of the nation’s finest point guards gave SLAMonline a look at an impressive workout.

Holloway has been a household name for a minute now. He led Xavier to three Sweet 16 appearances and was one of the better players in the A-10 throughout his career. Ending things as X’s all-time leader in free-throw percentage, sixth leading scorer, and third leading assist man, he’s in the argument for best point in school history. The New York native played a year of prep school ball in Cincy and has made the city his home for the last half a decade, making it easy to see why he was so quick to defend his turf and zip ’em up when everything went down against UC.

Getting at it bright and early with Wayns, Holloway zig-zagged his way through drills before throwing up a variety of finishes. Euro-steps, floaters and left-hand finishes were emphasized for the guards. Not the guy who will be banging on you on the regular, stuff like this will be crucial for Tu once he gets to the League.

Finishing up the workouts with shooting drills, Holloway straight killed it from mid-range. Whether it be off the dribble or coming from a full sprint, he was automatic. Expanding out to the NBA line, Holloway was right on par with the majority of other guards, though he was no Wayns (who hit 10-plus NBA threes on three separate occasions).

Looking forward to the Draft, Holloway is a guy who seems to have firmly supplanted himself in the second round. He’s not a workout warrior, but more so the type of dude whose track record speaks for himself. As long as he shows teams that he can shoot the rock the way he did at Impact Basketball, he’ll be fine on Draft night. Having a glowing reference from your college coaching staff doesn’t hurt, either.

“Tu has one of the best work ethics I have ever been around, he truly loves the game,” longtime Xavier assistant coach Travis Steele told SLAMonline. “He came to Xavier without a big reputation and left as one of Xavier’s all-time greats.”