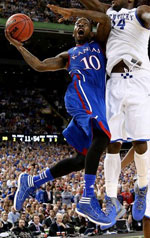 Continuing our NBA Pre-Draft Tour, the next destination to stop at was Houston, TX, to see what John Lucas Enterprises had to offer. Along with right-hand man Brian Merritt, Lucas offered an incredibly strong group of potential draftees, starting with Kansas point guard Tyshawn Taylor.

Fresh off of taking KU to the title game against Kentucky two months ago, Taylor wrapped up an outstanding college career with his most productive season by far. His averages of 17 points and 5 assists per game while running point supplanted him on NBA Draft boards as a guy who’s going to get looks in the late first round with his package of size, speed and athleticism. More of a combo guard by nature, it’s been a learning process for the Jersey native in his time in Houston with Coach Lucas.

“I’ve really been working on my decision making,” Taylor admitted to SLAMonline. “I’m really becoming more consistent from NBA three-point range and am becoming more comfortable as a playmaker.”

Bearing some similarities to John Wall because of his freakish combination of size and speed for his position, Tyshawn showed the ability to get by just about everyone when the players began running five-on-five. When the ball was moving in transition, it was Taylor who was the catalyst—not only scoring the ball, but getting the rock ahead to other players. It was one area of his game that certainly set him apart from everyone else, and he made it evident as to why he thrived in Bill Self’s up-and-down system for the Jayhawks.

Working on cutting down his turnovers and improving on his mid-range game, Taylor admits that he’s “more of a natural combo guard” but “has the length and athleticism to defend both positions.” We certainly agree with him there, especially about his potential on the defensive end.

The 22-year-old not only has the lateral quickness to stay in front of you with his feet, but has equally blazing hands to get his hand on a number of balls. He knows that he’s going to have to fight off some of the detractors who say he’s not ready to man the helm at the next level. Taylor disagrees and feels that he’s going to immediately show teams why they should take him from the second he walks in the door.

“This isn’t college anymore. Every time I step on the court, I’m fighting for my life,” the confident guard said. “This is a job now, and one thing that I’m going to do is make all of my teammates better.”