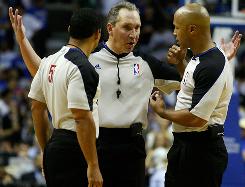 Since forever, NBA fans and media alike have moaned and complained about the referees’ incompetence. The last few years, however, the criticism seems to have intensified, with a particular gripe being the age of the men with the whistles.

Four NBA refs (with an average age of 53) will no longer be running up and down the court starting next season, but an iconic (and really old one) refuses to go despite the push from the League.

The NY Times reports on the four departing officials, and a new one who’ll be able to look players directly in their eyes:

Four veteran referees with a combined 72 seasons of N.B.A. experience have retired or moved on: Joe DeRosa, Joe Forte, Sean Corbin and Phil Robinson. The vacancies will be filled by five Development League referees, one of whom will stand out for his size if nothing else. Kevin Cutler, who is 6 feet 8 inches, will be one of the two tallest officials in N.B.A. history. Cutler, 42, became a curiosity in N.B.A. arenas last season when he refereed a half dozen games as part of an initiative aimed at preparing top prospects. Four others who participated in that program — Brent Barnaky, Nick Buchert, Josh Tiven and James Williams — have also been promoted.

The 60-person staff for 2010-11 will be younger and less experienced, continuing a recent trend. The league has lost several seasoned referees over the last half decade, mostly to injury or retirement. Steve Javie, one of the league’s best referees, nearly joined that group but will return for a 25th season … Dick Bavetta, who turns 71 in December, is returning for his 36th season despite persistent rumblings that the league is pushing him to retire.

It’s clear that the League is listening to its critics when it comes to refs, and looking to find solutions. It remains to be seen if younger officials means they’ll call the games any better.