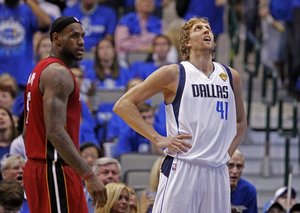 The League will inform the world of the scheduled games for next season tomorrow afternoon, a season that may not even happen. Time to get excited, everyone!

Despite the depressing reality of the lockout — with absolutely no telling how long it will last at this point — the NBA is ready to rev up the hype machine for the following season, whenever that may begin.

ESPN has the scoop:

Sources told ESPN.com that the schedule, as it stands, calls for the Mavericks to open the season Nov. 1 at home against the Chicago Bulls and raise their championship banner. But since the league imposed a lockout at 12:01 a.m. on July 1, owners and players have yet to even lock in a date to resume labor negotiations, with pessimism rising leaguewide about the season starting on time as the sides remain miles apart in their demands.

The NBA released its schedule two weeks later last summer — and in two installments — but that’s largely because the league was waiting for a slew of big-name free agents to land before finalizing things. Because of this summer’s lockout, there are no roster moves to wait on.

According to the Miami Herald, one of the big Christmas Day showdowns will be a re-match of the NBA Finals, as the Miami Heat will travel to Dallas to face the defending champion Mavericks.