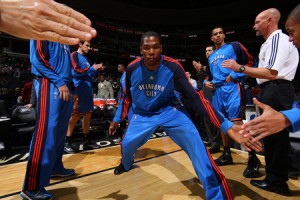 The NBA’s No Fun Police is at it again.

The League’s latest rule is that pregame handshakes can’t last longer than 90 seconds. This may not seem like a big deal, but for young teams like the OKC Thunder (who stage an elaborate, amusing pregame routine of hugs and handshakes every night), it sure is annoying.

Count Kevin Durant among those who aren’t fans of the new regulation.

Before Tuesday night’s preseason game against the Charlotte Bobcats at Chesapeake Energy Arena, Thunder players noticeably rushed their routines before stepping onto the court in time for the tip. Three-time scoring champ Kevin Durant was in the middle of his on-court greetings with teammates when the ball was put in play.

“I personally don’t like it,” Durant said of the 90-second rule. “Every player in this league has routines they do with their teammates, rituals they do before the game and before they walk on the floor. The fans like it. The fans enjoy it. You see the fans mimicking the guys who do their stuff before the game. To cut that down really don’t make no sense. Why would you do it? I really don’t agree with it, but I don’t make the rules.” What adjustments will Durant make? “Maybe I’ve got to go a little quicker,” Durant said. “I’ve got to make sure I acknowledge all my teammates before I walk out on the floor. That’s just how I am. That’s how we are as a team, guys do their thing, their handshakes. I do the tying (of) the shoes, the praying. I’ve just got to speed it up.”