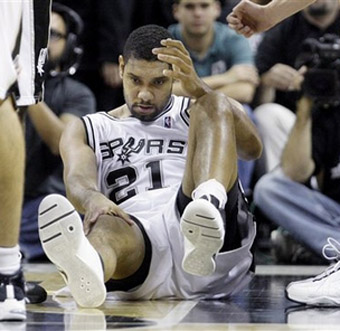 Holly took one of her trademark nine hour bus ride to go to the Warriors-Sonics game last night, so The Post Up is going to be a little bit delayed. Hopefully she wasn’t burned alive by the flaming scoreboard. The sad news from yesterday is that Stephon Marbury‘s father Don passed away. Our sympathies go out to the Marbury family. As you may have noticed, Stephon has been having an interesting to volatile early season. I’ll skip over any Knicks basketball talk out of respect.

The biggest on court news from over the weekend is obviously the Tim Duncan injury. They’re saying it’s a bruised right knee and sprained right ankle, nothing earth-shattering, but he’ll be missing some time and perhaps there could be lingering effects. You’ll never believe this, but the Spurs have the best record in the West right now. The photo on the left is Duncan trying to heal himself. You ain’t Adam/The Cheerleader from Heroes! Season Finale tonight.

Kevin Durant had his first monster game with 35 much-needed points in a Seattle win over Indiana. Dwight Howard had 30 and 23 in a loss to Phoenix. The Bulls scored 111 points against the Bobcats, the Pistons are putting up the points, the Jamario Moon feel-good story is still ongoing, Peyton’s little brother overcame three terrible quarters and three thousand of my meanest insults and text messages to friends to win a football game, Cleveland played without LeBron twice and lost twice – LeBron’s the MVP!, Golden State has won six in a row and nine of ten – Stephen Jackson’s the MVP! Huge overtime win for New Orleans over Dallas.

Other than all that, pretty standard. Not much going on.

We should have some Game Notes coming in from a few different places, possibly including the biggest game of the weekend. I’ll leave that up to your imagination. Feel free to fill in anything I skipped over in the comments.