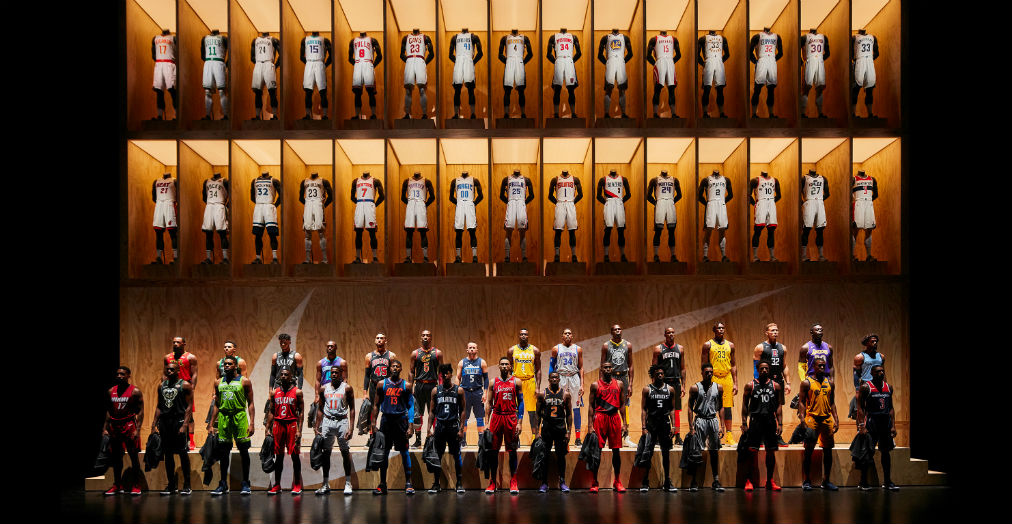 At a star-studded event in Los Angeles that brought players from all 30 teams together, the NBA x Nike have officially unveiled the “Statement” jersey and an apparel collection that features all-new hoodies, shirts, shorts, jackets and on-court socks.

The “Statement” jersey, Nike says, is “inspired by the team’s desire to make a bold statement every time they step on the court.”

“Socks are the first line of defense,” says Kobe Bryant via press release. “Your feet are the most important thing you bring to the game. You’ve got to take care of your feet.”

Kobe reportedly challenged the designers to create socks so strong that players could stop wearing two at the same time. Here’s more straight from Nike on the socks:

Kevin Durant, who is known for layering two pairs of socks out of a preference for maximum cushioning around his heels and ankles, had significant input for the super-cushioned NBA NikeGrip Power Crew sock. “I want a lot of cushioning,” Durant told the development team. “But I want to feel the court.”

Feeling the court is equally important to LeBron James, who pushed the designers to prioritize traction as much as cushioning, and to achieve an optimal level of compression and flexibility around the foot and ankle. “It’s important that I don’t slide in my shoes,” says James, whose input influenced the placement of NikeGrip on the NBA NikeGrip Quick and Power Crew socks. “I need traction for cutting and jumping.”

The designers responded with socks that are extra-cushioned in the heel, forefoot and ankle. NikeGrip technology pops up on the lateral side of the foot. The forefoot of the NBA NikeGrip Quick Crew sock “has Nike Forefoot Lock (two thin spandex bands that arch to support the foot and prevent the socks from bunching near the toes,” Nike says via press release. Both socks also feature a heel lock to reduce sliding.

Besides the official NBA shirts and shorts that Nike will release closer to the start of the season, they’ve built a brand new hoodie for warmups.

The fresh-out-the-oven Therma Flex material is the crown jewel of the hoodie.

The extra-stretchy Therma Flex material moves in concert with players. Side zippers allow for ventilation while elastic cuffs stop sleeves from falling over player’s hands while shooting or dribbling.

The mesh over the ears of the hood was created so that the wearer can hear teammates, coaches or buzzers during pregame and halftime and to avoid getting too hot with the hood up.

“We learned that most guys prefer to wear a hood up, but it impedes the way they can see and hear, it moves around and it can get really hot,” Parker says via press release.