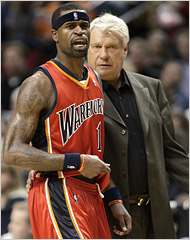 Stephen Jackson may no longer want to play for the team, but according to his head coach, Jackson’s role as the on-court leader will remain unchanged.

Don Nelson stated that despite a desire to play elsewhere, S-Jack will continue to rock the C for the Warriors.

It has been widely speculated since Jackson’s comments that the Warriors would seek to trade him – less than a year after awarding him a three-year contract extension worth $28 million early last season – but Nelson confirmed in a brief conversation Monday that “Jack is still my cap.”

“I’ve talked to him,” Nelson said as he prepared to travel to Chicago for the annual preseason meeting of the National Basketball Coaches Association. “I don’t anticipate any problems.”

In all likelihood, this is just Nellie playing the political game, and making sure not to upset Jackson anymore, lest he pipes up again and drives his trade value even lower.

Jackson’s captaincy will be symbolic next season, as Nellie and management quietly fish around to see if there aren’t any takes for his services.