Nerlens Noel Likely Out for the Season 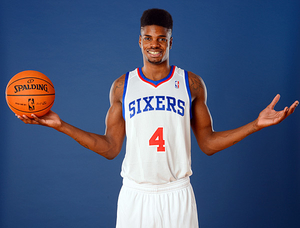 The big man nightmare continues to haunt the Philadelphia Sixers.

Barely removed from Andrew Bynum’s varying hairstyles on the bench, the Sixers will likely not have the guy who was supposed to man the paint for a second consecutive season.

Per the Delaware County Daily Times:

Brown made that statement Monday night in Columbus, Ohio, before the Sixers played the host Cleveland Cavaliers in a preseason game on the campus of Ohio State University. “I doubt, everybody doubts (Noel) is going to play this year,” Brown said. Brown went on to say that Noel has shown improvement in his rehab, but added that progress been “slow.”

This is the first instance that Brown has ever hinted of Noel’s injury causing him to miss his entire rookie season. Noel has been traveling with the Sixers while rehabbing a torn anterior cruciate ligament in his left knee, an injury he sustained last February in a game at Kentucky, where he played one season. The Sixers had intimated all along that Noel’s debut with the team seemed most likely in 2014, possibly as early as January, but had never assigned a timetable for the 6-11, 230-pound center.

No official decision has been made regarding Noel and his surgically-repaired left knee, but Sixers fans probably shouldn’t hold their breath about seeing the rook — or anything too positive from their team — on the court.

He came into the League with a chip on his shoulder, talking a big game, and scored a splashy shoe deal.

Nerlens Noel will have to wait a while longer until he can prove the doubters wrong.