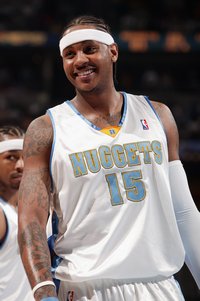 After everything that’s happened with Carmelo Anthony and the Nuggets this season, it was only a matter of time before the trade rumors began swirling.

Today, we have our first: According a Jersey paper, the Nets and Nuggets are exploring the possibility of moving ‘Melo to The Swamp.

Thinking big, the Nets have had exploratory conversations with Denver about Carmelo Anthony and Marcus Camby, league sources said. Vandeweghe traded for Camby and drafted Anthony in Denver.

Should there be any truth to this, logic would dictate that for New Jersey to get their hands on ‘Melo, they’d have to give up Vince Carter. And unless a third team elects to get involved in this mess of a trade, I don’t see how this move would significantly improve either squad.

So, for argument’s sake, let’s say this goes through: New Jersey gets a former defensive player of the year, and a young scoring forward with some baggage, but a great future. And Denver gets a past-his-prime wing player, for whom defense is the only thing he hates more than contact.

It’s a perfectly terrible idea, but I’ve learned not to underestimate the Nuggets front office.