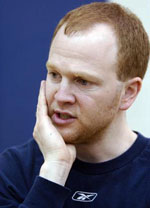 The trip from Ottawa (my hometown) to Toronto is usually four hours. If you drive (ahem) “creatively”, you can make it in just over three hours. On Friday night, I opted for the train, and I arrived in just under five hours. Note to self: next time, drive!

I arrive at the Air Canada Centre with just enough time to grab a bite to eat before the game starts. As per SLAMonline tradition, here’s the official food critique: I wasn’t too hungry, so I grabbed two slices of pizza which had bacon, mushrooms, green peppers and extra-cheese as toppings. Tasty. Even though the pizza was a tad cold, I gave it an overall grade of B.

As I looked up from my plate in the media waiting room, there he was. The peerless Marv Albert. He was in town to call the Nets game for the YES network. I considered jumping over my table and bear-hugging him, and telling him what a hero of mine he is. Logic and better judgement eventually prevailed, but not by much. Marv is much smaller and more unassuming in person than I would have imagined. Regardless, he is and will always be The Man.

I went and stood near the court to watch warm-ups as they were winding down. Vince Carter was sharing all kinds of love with the various ACC employees (no Mark Foley!) around the court, and seemed to be in a relaxed mood. Maybe a little too relaxed, judging from his performance tonight.

Just after both National Anthems, a public service announcement comes on the Jumbotron. The guy doing it is none other than former Raptor Jerome (The Junkyard Dog) Williams. Vince looks up and starts cracking up and shaking his head in disbelief at the thought of his former teammate doing public service ads.

I’m handed a sheet of notable players not suiting up tonight: Chris Bosh (current SLAM cover subject) for the Raptors, and Richard Jefferson for the visitors.

The obligatory boos from the crowd whenever Vince touches the ball are out in full force. Perhaps he’s rattled by them, because he bricks his first shot of the game. A sign of things to come (that’s called foreshadowing, kids.)

With Vince in town, it’s a packed house tonight, so my seat isn’t exactly the greatest. What’s that? I didn’t pay for this seat, and I’m at an NBA game with a press pass and the right to go to any part of the arena that I choose? OK, I’ll shut up now.

Jason Kidd and Jorge Garbajosa open the scoring for their respective teams. Garbajosa, by the way, looks like he literally just rolled out of bed. I keep waiting for a ballboy to bring him a coffee on the bench.

The Nets are running their offense through Vince. Unfortunately, he starts out by missing three of his first four shot attempts. The crowd loves it.

Despite the crowd’s animosity towards Mr. Carter, I spot a bunch of jerseys with his name on them throughout the arena. Some guy is even rocking a Willie McGahee Buffalo Bills jersey. Why the hell not?

First overall draft pick Andrea Bargnani has yet to score, but that doesn’t mean he hasn’t been trying. In the first quarter alone, he jacks up and misses four three pointers. The thing that impresses me the most about him is his ability to create off the dribble. For a guy that big, he is very smooth with the ball. Good looking player.

Morris Peterson, who recently returned from injury, gets a nice hand from the crowd when he checks in. Without a doubt, one of the most popular Raptor players in the team’s brief history.

Peterson and Vince are matched up. Wonder if they’ll slap each other around for old time’s sake.

Marcus Williams is not what one would describe as shy. He jacks up a long jumper as soon as he checks in for Kidd. I’m sure Vince loved seeing that.

New Jersey cuts the lead to three thanks to the aforementioned Williams. The rook scores three quick layups, and Vince adds a dunk in traffic—nothing special.

(The previous paragraph was brought to you by the ACC’s media restroom. It’s a pristine and spacious area—and would it kill them to put a couch in there?—with speakers mounted on the walls to allow you to follow the game while you handle your business. Is that too much insider info?)

When I return to my seat, I see Marcus Williams and Jose Calderon exchange laughably easy layups as both teams basically decide to not play any defense. This is followed by two straight dunks (Rasho Nesterovic and Joey Graham), pushing the Raptors’ lead to six with just over 4 minutes to go until halftime.

Vince only has two points at this point, and it doesn’t help matters that TJ Ford just stuck a jumper in his eye.

Moments later, something else gets in his eye as he is forced to leave the game briefly. Apparently, someone knocked out one of his contact lenses. The crowd, naturally, lets him have it. Man, I couldn’t imagine what it’s like being in his shoes right now.

Joey Graham tomahawks all over Bostjan Nachbar to close out the half. Graham has a wide grin as he runs back down the floor, and who can blame him? That dunk will be in the highlights.

At halftime, I decided to walk around the ACC a bit and get familiar. I ran into one of the ushers and we struck up a conversation. He tells me that he isn’t comfortable with the Raptors’ lead because they always soften up in the second half by not playing any defense and settling for long jumpers. Hmm, we’ll see if his doomsday prediction comes true.

More public service announcement fun: this time the message is delivered using clips from the hit TV show The Office. I approve.

Rasho gets iso’d on Vince early in the third, and after a couple of dribbles, he springs free for a nice turnaround on the right baseline. Vince responds with a dunk off his own miss. Again, nothing special. He has eight points. 51-43 for the Rapts.

(The Raptors’ offense is really smooth right now; they’re moving without the ball, and the passes are crisp. No possession seems to be wasted. The Nets, on the other hand, are on the opposite end of the spectrum.)

BA-RGNA-NI!!! The skilled rookie does a nice reverse dunk as he side-steps Mikki Moore and his wild mane. The crowd loses their collective mind over the highlight reel play.

Hassan Adams (who’s wearing inexplicably tight shorts), not to be outdone, hammers one on the ensuing Nets possession.

The Raptors come into the fourth with an eight point lead, but it feels like it should be much bigger.

A quick peek into the Raptors’ media guide reveals that only three Toronto players have 5+ years of League service. New Jersey, on the other hand, has 8 guys, including the immortal Cliff Robinson (that’s uncle spliffy to you!) with an impressive 17 years of service.

BOOOOO-urns…Vince rejoins the fray and the fans welcome him. The Raptors’ lead has been cut down to just two points.

The in-house DJ plays Jay-Z more than any other artist, and does it very loudly. Does he know that S (dot) Carter has a financial stake in the opposing team?

I’d like to say that the Raptor Girls are well-coordinated dancers, but I’d be lying. I would also be lying if I said they were anything but unspeakably cute. Of course, their cuteness renders their dancing ability (or lack thereof) completely irrelevant, much like this paragraph.

Thank goodness I’m watching this one live, otherwise Chuck Swirsky would have tried to convince me that the last two Raptor baskets to push their lead to 7 were SICK, WICKED AND NASTY!!! (shudder)

(During a break in play, I glance up to the jumbotron and notice that the camera is scanning the different faces in the crowd. Some dude decides to take this opportunity to to show off both of his nipples. I could’ve done without that, thank you.)

An inspired “Carter Sucks” chant starts out of nowhere. Even the cynics at press row can’t help but smile. I gotta tell you, I didn’t think the fans in Toronto had it in them to become true, vitriol-filled supporters of their team, but they’re proving me wrong tonight.

Vince cuts the lead to 10 with a series of drives and trips to the line, but the Nets just don’t seem to be able to get over the hump. Carter is having a tough day all around; if he’s not missing from the field, he’s clanking free throws. This is unusual, because he usually lights up his former team.

The “Carter Sucks” chant, growing louder now, is even starting up when the Raptors have the ball. Hilarious.

With a little over a minute left, the Nets start trapping the Raptors in the backcourt. This changes nothing. Steam can be seen emitting from Lawrence Frank’s seat.

With the game out of hand, VC checks out to a thunderstorm of boooo-urns. Tough night.

I was in a bit of a hurry, so not too much from the locker rooms.

(The sight of Frank and Nets beat writer Dave D’Alessandro—one of the best in the biz—huddling in a corner and speaking in hushed tones about what I can only imagine are nuclear secrets, brings a smile to my face.)

Vince talks to a large media gathering. He tells them about not letting the fans get into his head. He says that he’s been in this league too long to let that kind of stuff affect him. Vince looks a lot younger in person than he does on TV; if I didn’t know any better, I wouldn’t give him more than 24 years of age.

The fact that Vince is barely taller than me and can do things in the air that I can’t even wrap my head around, is something that depresses me for a moment. Then again, I was just standing next to the greatest dunker of all time, so what’s not to love?

I promise that there’ll be more from the postgame on Sunday when Baron and the Warriors are in town. Looking forward that one.