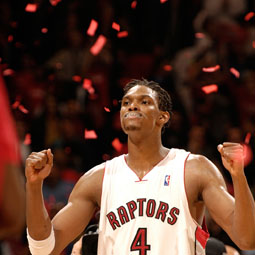 So the series is tied up now, after the Rapts handled their biz on the day that coach Sam Mitchell snagged Coach of the Year honors.  Interestingly, I was having a Gmail chat conversation with my man Tony during a third quarter timeout and Kidd already had about 11 points, 10 boards and 5 assists at the time. I was trying to convince Tony that Kidd (not Nash or Baron or whomever) is still the best point guard in the game, that even though his on the ball defense has waned considerably, he’s still active in the passing lanes, he’s always drawing charges and he probably grabs a good 5 to 6 defensive boards a game. My point was that when you combine that with the way he controls the game on the offensive end (despite his horrid shooting), he’s the illest cat doing it – still. And then the end of the fourth quarter descended upon us and no one on New Jersey could hit a shot. That’s when it dawned on me that Nash would have most definitely knocked down a three when the Nets were trying to tie things up. It made me rethink the conclusion to my hypothesis.

After the game a reporter asked Mitchell if the Nets gave up the game more than Toronto won it. Mitchell rightfully scoffed at this assertion, stating that the inverse question could have been asked about Game 1. The fact is, the young Rapts outplayed the veteran Nets down the stretch when one might have thought their inexperience would bite them and send ‘em to Jersey staring at a sweep.  And it wasn’t on the shoulders of a 12-point fourth quarter from Bosh or something. Anthony Parker, Jose Calderon, TJ – they all stepped up. That 8-0 run to begin the fourth quarter (with Kidd on the bench) was a Bosh-Parker thing, but then it was Calderon that dropped two buckets in a row to halt the Nets comeback and TJ’s orchestration and clutch free throws later on. The Rapts looked more athletic and hungrier. They even had a bit of swag. Meanwhile, the Nets were shooting bricks at the rim and couldn’t overcome the Rapts pressure D. Makes you think that the Raptors might be able to take this series (even though I’m sticking with my Nets in 5 prediction).

The tight, up-n-down second half was a respite from the first half where the teams combined for 26 points in the first quarter and were largely inept. Seriously, they couldn’t do anything. TJ Ford was stuck guarding Vince in the post for about four possessions in a row and nothing came of it. In fact, I’m starting to wonder when the Nets will finally be able to exploit that obvious Raptors deficiency. They should be running the offense through Kidd in the post. It’s not like the Raptors can hit you with defensive rotation on some ’04 Pistons-type steez. When they double down, a squad like the Nets should be able to take advantage of it. But then you have big men like Mikki Moore and Collins that play hot potato with the rock no matter how perfect of a pass they’re hit with.

I’m interested to see how the young Rapts respond with their first playoff road trip. It’s not like Continental Airlines Arena is Arco arena or even Air Canada, but a road game is a road game.

–  LaDainian Tomlinson was in the building.  Why?  That’s the same question I’m asking.
– Fans need to think of something more witty and disrespectful to do after the player they’re booing makes a shot or free throw.  Shutting up just doesn’t cut it. All night, Rapts fans chanted really clever things like “V-C-Sucks!” or booed loudly, but when he hit a shot they’d immediately shut up. It’s kinda embarrassing, actually. I’m not the illest heckler out there, so I don’t have much to offer here. I’d just like to see the fans, the 12th Man, be a little more gangsta about theirs.
– Remember when Kidd used to be able to grab a rebound and literally streak up the court like Drexler (or Barbosa, these days) for a lay-up? Word, he can’t do that anymore.
– Nachbar is a monster. The Rapts can’t handle him. Frank needs to exploit this.
– Five Canadian teenagers were out at midcourt, break dancing to what sounded like circus music.  And by circus music I mean the kind you hear at a Ringling Brothers show when they bring out the clown.  They were BREAK DANCING to this.  That is absolutely not hip hop.