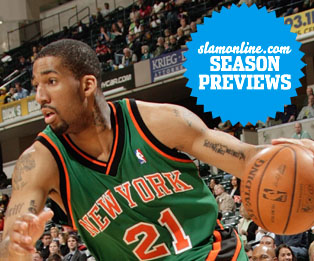 We continue previewing the Atlantic Division with the New York Knicks. You can read past previews here.

There were nights last season when you had to wonder how anyone could continue to care about the New York Knicks. A year that began with high expectations and playoff hopes quickly turned into a bizarre campaign that included few wins and little progress. At 23-59, the Knicks needed to make moves to not only save face, but the legacy of the franchise.

Isiah Thomas couldn’t build the type of team chemistry on or off the court that generates wins. The Knicks were often disillusioned by their coach’s decision making and even more so by the messy lawsuit that was brought against him and Madison Square Garden. By December, it was clear the Knicks troubles were, pathetically, only beginning.

Donnie Walsh moved back to New York, much like Lenny Wilkens and Larry Brown did during the Thomas era, to clean up his hometown team and begin the rebuilding process once again. His first move was “reassigning” Thomas on April 18. Walsh hired Mike D’Antoni from the Suns, who brings a winning attitude and a style designed for athletic players who can shoot. So, despite having little success last season, a number of players could potentially fit into D’Antoni’s brand of basketball. But there are current Knicks who don’t fit-in, and it’s been an uphill battle finding takers for those guys.

While a new coach and team president is a big step in the right direction, the Knicks still face a few more rounds of revolving chairs before everyone is in place. Those doors might need to be pried open with a crow bar, but with the economy being like it is, someone will be bound to take a chance.

Stephon Marbury has let his hometown down. Talk of playoff runs and even championship rings were premature and never even remotely realized. Aside from a trip to the playoffs in 2004, the Starbury era has produced few results in the way of glory. This summer, the Knicks signed Chris Duhon, effectively providing them with a potential replacement starting point guard.

Despite posting the best scoring numbers of his career, Jamal Crawford couldn’t get comfortable at one position to really be effective. To his credit, he looked like he may have been trying too hard sometimes. This year, he’ll be better able to play off the ball and not be forced into playing point guard, like he did at times under Thomas. His insurance policy is the fact that, aside from Marbury, the Knicks have Nate Robinson, Mardy Collins, Anthony Roberson and Duhon who are all capable of running the offense.

The presence of so many point guards creates another problem, how many of them are going to make the team? As well as, who will start? While the answers aren’t so obvious yet, the Knicks are certainly making things interesting for their fans.

Marbury stayed with the team through heavy turbulence and now it’s unclear if he will last through another Knicks regime. The Coney Island product only managed 24 games last season before ankle surgery ended his season. And while he played, he wasn’t the leader that his team needed last season.

One of the most disheartening of Thomas’ backfires was the addition of Zach Randolph to the team. Anyone who watched the Knicks last year knows that Z-Bo might not have had many great nights in the Garden, but he did finish the season averaging a double-double, unlike his teammate Eddie Curry. While Curry’s progress slumped a bit last season, it’s unclear how much of a future either of these players have in New York.

The bright side is, the Knicks have somewhat of a blossoming frontcourt compared to their backcourt.

David Lee went hard in every minute of the 81 games he played in last year and should be a no-brainer for D’Antoni’s upbeat style. However, he’s so good that he might be too good for the Knicks. Lee, from what rumors have surfaced, might be more valuable to the Knicks if he was included in a package deal that sent someone out of town, most likely Randolph. Since a deal to Memphis was killed, Lee should be on the Knicks roster opening night and, in a perfect world, forever.

Wilson Chandler played limited minutes last year, but when he was in the game, he was as bright a spot as there was in a really stained season. Chandler snuck in a strong 23 against the Orlando Magic in April and proved to be the last draft pick selected by Isiah Thomas. Though he averaged only 7 points in limited action, D’Antoni is high on Chandler, and he’s rumored to have already earned a place in the Knicks “TBD” starting line-up.

Danillo Gallinari is all the hype out of Italy right now, but was saw only limited action in summer league. Sources close to the team say “Gallo” is the real deal and ready to play in the NBA right now. However, to what extent the 6-10 forward – with the usual Dirk-like comparisons – will actually help the Knicks collect wins is the biggest question.

Malik Rose and Quentin Richardson are still hanging around and could continue to supply some solid spot work and leadership. Rose has been a leader since he joined the Knicks, already an NBA champion, while Richardson has played a positive role in Chandler’s development on the court and away from the game.

Knick fans can’t expect too much. Last season, the Z-Bo trade generated a short-lived “they’re definitely making the playoffs” kind of excitement that was sure to soil the season before it began – and did. With all that happened, 35 wins this season would be asking for a lot. However, given some roster changes, it shouldn’t be totally out of reach.