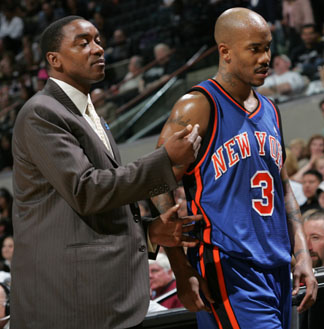 By Joey from Straight Bangin’

Depending upon your perspective, it’s been either really gorgeous or really ugly in New York this past month.

For years, a majority of Knicks fans have decried Isiah Thomas’s stewardship of the franchise, and owner James Dolan has not been spared from facing similar ire. Seeing the two figures most instrumental in the general demise of a franchise that had at least remained proud even when failing to capture a title suddenly dragged through the litigious mud of a sleazy sexual harassment lawsuit has provided cathartic schadenfreude. But that’s all Thomas and Dolan have provided, and that’s perhaps the ugliest part of the entire salacious episode.

The Knicks just haven’t mattered this decade, and they’ve slid from mediocre but relevant to embarrassing and infamous under the existing regime. Since losing to the Pacers in the 2000 Eastern Conference Finals, the Brickers have only made it to 40 wins or more once, and they’re averaging fewer than 30 wins a season over the past three years. A team whose defense was the bedrock of its success has become a porous outfit whose most exciting wins are characterized by the success it finds in spite of itself. High scoring, too many turnovers, bad decisions throughout, no defense–Go New York, Go New York, Go! If the team intends to significantly improve this year, the roster doesn’t reflect the intention. It looks like it will be another long season for Knicks fans.

The best place to start is at the point, with Stephon Marbury. When he’s not turning out interns in his truck, Stephon is helping to turn other teams into winners. Last season, Stephon played the most minutes of any Knick, and he had the third-worst point differential (gotta use that word if we’re talking NBA, just listen to your favorite announcer describe shot and game-clock disparities. But I digress…) on the team, coming in at -167. With Stephon out there, teams scored more than 100 points a game while the Knicks usually got to just 97. And he was an equal-opportunity loser: Of the Knicks’ twenty most common five-man floor units, Star Child was a member of fourteen, and ten of those had a winning percentage below .500. Ten also averaged more turnovers than its opponent. We can pick our way through more numbers, but the picture that emerges is an ugly one for Knicks fans. The team’s best player, the one who handles the ball more than anyone, the point guard charged with orchestrating the offense–he continues to score well enough, manufacture shots near the basket well enough, and pick up assists well enough, but it’s all done in a losing effort. Instead of leading the team to victory, he is most commonly responsible for losses created by sloppy play and absent defense. As Jason Jackson might have said were the NBA 2nite still the most fun NBA show ever: dat not good.

In some ways, it’s fitting that Marbury leads the Knicks, because he is truly emblematic of the roster: talented, but not enough defense, and not enough winners. Heading into training camp, we can assume that the primary Knicks rotation will be composed of Marbury, Jamal Crawford, Quentin Richardson, Zach Randolph, Eddy Curry, Nate Robinson, David Lee, Jared Jeffries, and Renaldo Balkman (once healthy). Wilson Chandler should also get a run. That said, is there a lot of mystery about whether the Knicks will work together? Improve? What’s new in this equation, aside from Randolph? And, just to keep the questions coming, is he really going to be a key to changing the fortunes and culture of the team?

We’ve already covered what we’re getting from Marbury. Sure, there will be nights when the offense clicks and the team uses the positive emotion generated by scoring success to pretend like it cares about defense. On those nights, Knicks fans will confer and agree that, “This team has talent. And they can play well when they concentrate.” But don’t be fooled–there will be more games when an opponent easily reaches 100 and the offense is an odd mixture of ill-advised shots, slow developing post plays, and sloppy passing all around. It can often be staggering to consider that the Knicks spend more time playing basketball than doing any other one thing, because they shouldn’t play in the disorganized and maladroit fashion that characterizes so many nights. And yet: Jamal will jack up all those threes and get hot for enough fourth quarters to dupe fans into false hope; Curry will score but not rebound and loaf on defense; Z-Bo will do something similar but grab more boards and hit a midrange jumper with some regularity; Q will invariably get hurt; and Nate Robinson will fully cement his grasp on the historical niche of gully streetball midget who thinks he’s better than he is. Too often, penetrators will enter the lane unencumbered and find shot blockers to be absent. David Lee is going to be a bright spot because he will work hard on the boards, will run the floor, and will oddly complement the lumbering frontcourt redundancy of Randolph and Curry. Renaldo will play a similar game, although he may have one of the worst offensive skill sets among NBA contributors. Jared Jeffries peaked in the press clippings produced by his prep career; as has been discussed elsewhere, he is not especially good at any one thing.

Take all of that offensive potential, account for all of that defensive indifference, throw in a few improbable wins and the monthly embarrassment, and you have a team that will probably win somewhere between 33 and 38 games. Oddly, these Knicks seem to enjoy playing for Isiah Thomas–and you might, too, were your coach making defense optional and encouraging you to hurt players on other teams–so he may even finish out the season as coach if Anucha Browne Sanders doesn’t triumph in court.

Best-case, dream-the-impossible-dream scenario: Losing Channing Frye and Steve Francis while adding Randolph leaves the Knicks stronger up front, less distracted, and unified. No longer playing for Isiah Thomas’s contract extension and no longer saddled with the fallout from Larry Brown’s one-man exploration of the deepest narcissism and petulance, the Knicks have an incident-free, basketball-focused season in which winning and defensive effort are mutually reinforcing. The harmony on offense and a newfound defensive zeal carry the Knicks back to respectability and the playoffs. Feeling benevolent, the league sends Jerome James to the Elmer’s glue factory and bans Isiah Thomas from basketball, making it impossible for him to remain with the team or ruin anything else. James Dolan impregnates Britney Spears and decides he wants to relinquish control of the Garden so that he can focus on his new family.

Worst-case, end-of-days scenario: Amidst stars falling to the planet and the 144,000 being saved, the Knicks struggle to win 25 games. Injuries shelve Stephon and leave the offense without a conductor, to aimlessly drift from jumpers to turnovers to offensive fouls. The defense is as bad as feared, and David Lee demands a trade because he’d like to play with proper professionals. Detroit, Cleveland, Chicago, Boston, Toronto, Milwaukee, Orlando, New Jersey, and Washington all prey upon the Knicks, leaving few games against he Bobcats and Hawks. Anucha loses and Isiah stays. James Dolan decides that the best way to help the franchise to work longer hours, so he’s around the team even more.