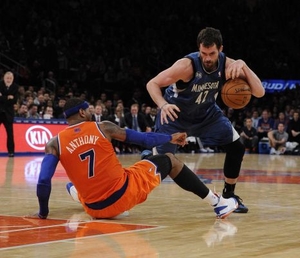 While most observers are trained, slack-jawed, on the ongoing trainwreck that is the 2013-14 Knicks, the New York front-office is said to be preparing for the future.

Or, perhaps more aptly, fantasizing about it.

According to Yahoo! Sports, the Knicks have already begun to devise plans to lure Kevin Love to Gotham when he becomes a free agent two summers from now:

Almost assuredly, Love will exercise his early termination option in two years and take a strong look at where the free-agent landscape stands with the T’wolves. He could re-sign a longer, richer deal with Minnesota, or chase big-market platforms in New York, Los Angeles, Chicago and perhaps elsewhere. The Knicks are buried in salary-cap hell through 2014, awaiting Amar’e Stoudemire ($23.4 million), Tyson Chandler ($14.3 million) and Andrea Bargnani ($12 million) to expire. The Knicks are sold on Love in 2015, sources say, and they’ve already begun devising a strategy to lure him when the time comes.

The possibility of leaving the Knicks for the Los Angeles Lakers will be Carmelo Anthony’s leverage until it no longer is, but as one source with knowledge of the process says: “Do you think ‘Melo wants to be known for not winning titles in New York and L.A.?”

Melo has let it be known that he plans to recruit other superstars to help him put an end to the Knicks’ 40-year championship drought. He has few other options, since the franchise seems to be right back where it started when Anthony came to town in 2011.

Can Kevin Love be convinced that Manhattan is the place for him going forward? Carmelo Anthony and the Knicks would certainly hope so.