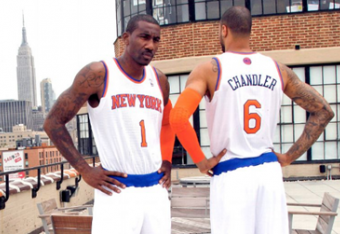 NEW YORK—It’s actually surprising that it took this long.

Changing uniforms has long been a go-to move for professional sports franchises looking to create a new image. A strategy employed by teams desperate to separate themselves from memories of losing or embarrassment or whatever their specific afflictions are.

This is why the Brooklyn Nets are leaving nearly every symbol of their Garden State background on the other side of the river. This is why the Cleveland Cavaliers dropped their black and blue for wine and gold in 2003 after drafting LeBron James. This is why the Florida Marlins are no longer the Florida Marlins. The logo on a uniform and the colors of a uniform are a team’s symbols. They’re what fans and advertisers see. Images implanted into the memory, forever associated with thoughts of that franchise. There’s no such thing as an easy fix in professional sports; there’s no such thing as a one-step solution, either. Changing a uniform, though, is certainly a good place to start.

Which again, is why it’s actually surprising that it took this long for the New York Knicks to do so.

The last time the Knicks changed their uniforms was in 2001, the year after they decided to trade Patrick Ewing to Seattle, a choice that

gave way to an eight year stretch of scandal and circus acts and losing. Lots and lots of losing. For the Knicks, the 00’s was a decade of turmoil and change. Coaches, general managers and players, came and went. The one constant during this period—aside from Herb Williams— was the uniforms.

In 2008, though, the course of the franchise finally took a turn for the better. Donnie Walsh was named team president, and two years later Amar’e Stoudemire was a Knick. A few months after that, Carmelo Anthony was one, too. A year after that, the Knicks won their first Playoff game in more than a decade. Small steps, for sure. But still steps, nonetheless.

On Thursday, the Knicks took another small step towards a new future and away from their recent past when they unveiled their new uniforms at the Hugo Boss showroom in Manhattan.

This is actually the seventh time that the Knicks have made significant revisions to their jerseys. With this modification, the goal was to blend the future and the past—to pay homage to the team’s history while creating a new one.

Gone is the previous edition’s v-neck collar. Players will now wear rounded crew-neck tops, just as Clyde and Monroe and Willis and Bradley and DeBusschere did in the 70’s. The word “New York” along the front is also more defined and less arched. Certain striped patterns have been removed; others have been replaced by solid colors. The most interesting addition, however, is an inscription of the phrase “Once a Knick, Always a Knick” inside the collar of each jersey.

Each of these alterations were endorsed by Amar’e Stoudemire and Tyson Chandler, both of whom were at the Hugo Boss showroom Thursday, along with Walt “Clyde” Frazier and Earl Monroe, to help the Knicks celebrate the unveiling of their new uniforms. The “Once a Knick, Always a Knick” addition was what seemed to excite the players, past and present, the most.

“When you represent a city of such magnitude, it’s an awesome feeling,” said Stoudemire, from the podium inside the showroom. “So when you’re getting dressed before the game and see (that slogan)… it gives you a certain feeling about the city you’re representing.”

For Stoudemire, that means New York City, the only city in the world that is home to both an NBA team and one of the four major fashion weeks. “Fashion and sports have long drawn influence from each other,” said MSG network’s Tina Cervasio during the presentation for the uniforms. In no city is this more evident than in New York. And, as exhibited by the four men onstage with Cervasio, in no team is this more evident than the Knickerbockers.

Chandler, in a (possibly intentional) tribute to working class America, donned a pair of fitted, rolled up navy blue pants, a green shirt buttoned all the way to the top and a black fedora tilted back. Stoudemire was in his usual dark jeans and perfectly tailored jacket. Earl Monroe was dressed in the more traditional look of a grey suit over a black t-shirt. And then there was Walt “Clyde” Frazier, one of sports’ first fashion icons and a man who hasn’t gone with a traditional look since the Vietnam War. As always, Clyde looked both wonderful and ridiculous. Purple and gold and green floral shirt; open top button revealing a gold necklace; fitted purple pants; yellow-ish shoes.

Being that it was fashion week, the discussion eventually moved from the Knicks’ latest fashion choice to those of the interestingly dressed men on stage. All four spoke about their personal fashion preferences and histories, which for Frazier, meant revealing his inner teenage girl.

“When I was a rookie, I wasn’t playing that good, so I would always go shopping to make myself happy,” Frazier said. “I’d go back to my room and look in the mirror and say to myself, ‘I’m not playing good, but at least I look good.’

“So one time I was in Baltimore and I bought this hat. It was a wide brimmed hat. So at first, everyone started laughing at me. But, as fate would have it, two weeks later, the movie Bonnie and Clyde came out and I wore that hat and everyone said, ‘Hey, look at Clyde.’ That was how the whole fashion thing started with Clyde.”

Fashion, though, was never something that Frazier kept to himself. Monroe said that when the Baltimore Bullets traded him to the Knicks in 1971, Frazier became his personal designer. “Clyde told me you have to look the part and dress as well as you play,” Monroe said. Apparently, he took Frazier’s advice very seriously. According to Monroe, the Knicks championship back-court provided the Italian tailor that they both shared with so much business that the tailor was able to move back to Italy and buy a Villa.

“Back then, guys were just so meticulous in what they did and how they did it,” Monroe said.

For Monroe’s Knicks teams, this was true on the court as well. Which is why Amar’e Stoudemire’s answer to the question of where his fashion choices come from may have, inadvertently, summed up part of the rationale behind the Knicks decision to change uniforms.

For Knicks fans, that’s music to the ears.