Nick Collison Is a Beast 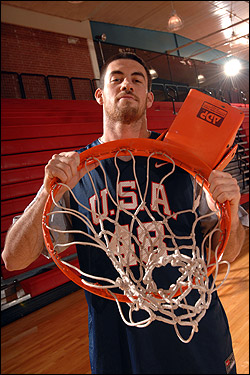 Lang might as well cancel his Vegas trip because the coolest thing has already happened: Linkstigator Nick Collison tore the rim down during practice.

We all looked to where the noise came from, and we saw Nick Collison standing under one of the side baskets with the rim at his feet.

“I was hoping practice would be over,” LeBron James told me afterwards. “I was hoping coach would say, ‘Hey, practice is cancelled.’ That’s the first thing that came to my mind. The second thing is ‘I hope he didn’t shoot a jumper and the basket fell.'”

When it was announced that Collison would be on the squad, a lot of people had the same reaction: Huh?! Well, now, I think this little story should silence the haters for a while.

UPDATE: Lang just texted Nick Collison for details. Collison responds: “Just the rim came off. It sounds cool but really it wasn’t. I did it before practice while I was warming up.”