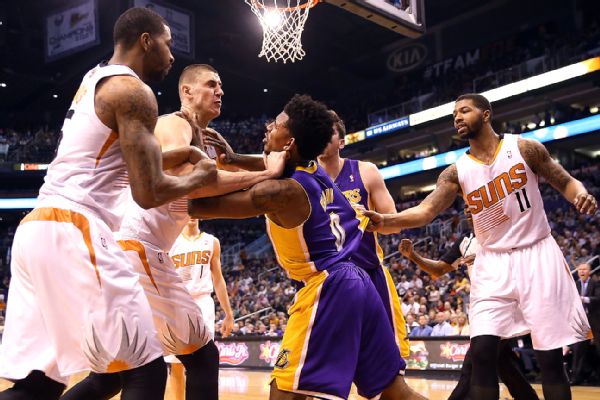 Things turned ugly for the Los Angeles Lakers in Phoenix on Wednesday night. Not only did they lose the game 121-114, but Nick Young was tossed in the second quarter after trying to fight the whole Suns team.

And that’s precisely the problem, according to Swaggy P.

Young called out his teammates for not defending him as he started to throw punches.

“What I was mad about is it was one-on-five,” said Young, who has posted nine points on 4-of-8 shooting before his ejection. “If somebody had gotten in the middle, it wouldn’t have escalated that much.”

It started when Phoenix forward Alex Len delivered a hard foul on Young that knocked him to the floor as he drove for a layup. Young immediately stood up and shoved Len back. Young and Suns forward Marcus Morris also shared shoves. Young then made contact with an open hand on Dragic’s head after he entered the fray. Len also earned a flagrant foul 2 and a subsequent ejection. Morris was slapped with a technical foul. Young soon removed his jersey before entering the player’s tunnel.

“You don’t fight in this league,” Lakers coach Mike D’Antoni said. “It wouldn’t help us to lose two or three more guys. I hate that Nick feels that way, but I’m sure at the moment he’s just talking.”

Pau Gasol expressed regret for not standing up for his teammate.

Nick Young has grown increasingly frustrated in a season riddled with injuries and mounting losses, and last night, he exploded. Had other Lakers joined the fracas, things would have only gotten worse.

The NBA will likely come down hard with suspensions and fines on Young and Phoenix forward Alex Len.