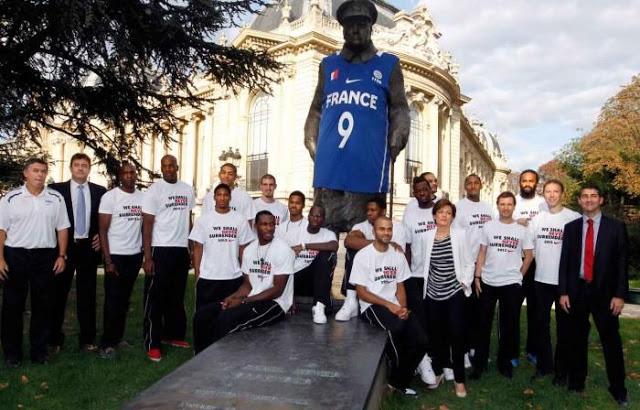 Four years ago, Nike draped an oversided Tony Parker jersey on a famous statue of Winston Churchill that sits in Paris.

This was done in commemoration of the national team’s qualifications for the 2011 European Championships.

The sculptor, Jean Cardot, was not amused and now the Swoosh must fork over about $75,000 in damages.

Per the Express-News (via Buzzflip):

Footwear giant Nike has been fined €67,500, the equivalent of roughly $75,000, for putting an oversized Tony Parker France national team jersey on a statue of Winston Churchill to commemorate Les Bleus’ qualifications for the 2011 European Championships.

Sculptor Jean Cardot sued Nike and a promotional company for defiling his work, and failing to ask for permission. A French court ruled last month that Nike had used the statue for commercial purposes in violation of Cardot’s rights.

Unveiled in 1998, the statue is located on Winston Churchill Avenue near the Champs-Elysée in Paris. It is one of the few statues in France that doesn’t depict a French national.