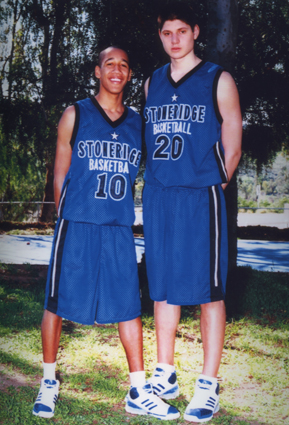 SLAM: Tell us a little about where you grew up.

Nikola Vucevic: I was born in Switzerland, that’s where my dad played [basketball]. I lived there for two years, then I moved with him [for him to] play in Belgium; lived there for seven years. Then we moved to Montenegro for four years before I came to the US [for his final year of high school—Ed.]. So I’ve moved all over the place. Every summer when I was with my dad, we would go back to Montenegro, so that’s where I consider home.

SLAM: At what point did you first pick up a basketball?

NV: I kind of played when I was 4. I used to go to practices and games with my dad, and I would play on a little basket on the side. I would just shoot there. I was born with a basketball—my mom and my dad played. Up until I was 8 or 9, I had a little hoop inside, in the hallway of our house. I was playing there pretty much all day.

NV: Sometimes. It was next to the living room, so if they wanted to watch something on TV, I would [be making] a lot of noise and they would tell me to tone it down a little bit. They liked that better than me sitting in front of the TV and playing video games or something like that.

SLAM: Was it your dad who started to teach you the game once you began taking it seriously?

NV: Yeah, he was my coach. It was the summer, and we came back to Montenegro from Belgium, and I was talking to him and telling him how I wanted to play basketball seriously, and he told me he’d be my coach for my club—you don’t play for schools there, you play for clubs. Even before that, he taught me almost everything about basketball. I learned lots by watching and playing, and he told me almost everything I knew about basketball.

SLAM: Was there an NBA player who you tried to model your own game after?

NV: Growing up, when I first started playing basketball, I was a point guard. I actually played every position—I played point guard, then I moved to 2, then 3, then 4, then 5. So, kind of hard for me to stick to one player because I moved to so many different positions. But I would say Michael Jordan. I had my Jordan gear, shoes, sweatpants, shirts, whatever. I had videotapes of him that I’d watch over and over.

The player who I learned a lot from was Vlade Divac—he was playing in the NBA and I watched a lot of his games on Sacramento. That’s when I started following the NBA the most.

SLAM: Is there anyone from Montenegro that you picked up as a mentor over the years?

NV: One guy I know very well because he’s from where I’m from is Sasha Pavlovic. He got drafted when I was 13, so there was an NBA player from my city and I was like, Wow, I want to meet him. Then I started dating his sister, and I actually still do—she’s my girlfriend. So I got to meet him and he would always talk to me about the NBA, and he told me a lot of stuff about the NBA that could help me. [Nikola] Pekovic as well, he helped me a lot. He plays on the international team. Them two, since I know them really well, they’ve helped me a lot.

SLAM: Is there any specific place that was really important to your development?

NV: My high school [Stoneridge Prep in Simi Valley, CA], during my senior year—it helped me for basketball but it helped most that it made me more mature. That was the first time I was away from my parents and had to do everything myself. I think that one year was really helpful for me to mature as a person, which translated to me being really mature on the court.

SLAM: When you play against guys from Montenegro in the NBA, is there a lot of trash talk?

NV: We trash talk a little bit, but it’s friendly. I went against Pekovic a long time ago. It was kind of exciting for me, because four years ago when I was in college, he was like the best player in Europe—the best big man. Everybody was a huge fan of his, and I was, too. I enjoyed watching him because he was playing really well. And then like three years later, I’m going against him. It was exciting. We talked a little bit [of trash]. On the national team, we talk about who’s better and all that.

SLAM: Pek doesn’t seem like a dude you’d want to piss off.