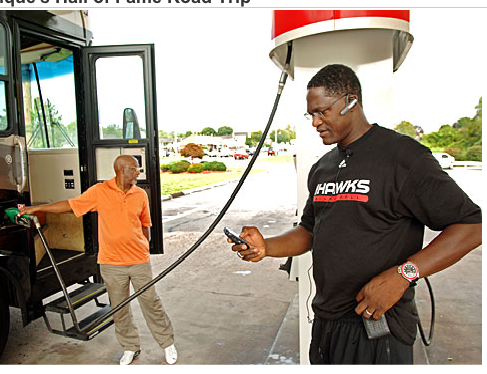 Not much out there today…

• AJC.com has a collection of photos from Dominique Wilkins’ road trip to Boston, and they’re pretty much an object lesson about all the things you’re not supposed to do while driving: talking on a cell phone while pumping gas, listening to an iPod on headphones while driving…at least he’s wearing a seatbelt.

• Good to see our former West Coast correspondent working so hard. As Sam pointed out, wonder if Arash told any of those girls that he’s a movie producer?

• Henry James, probably the best NBA three-point specialist ever to share a name with the American/British literary critic, is in some trouble. I was watching the game when he nailed seven three-pointers in a quarter.

• The Nuggets hired the guy who has basically been their GM all summer to be their GM. But I bet he doesn’t look as good in a turtleneck as Kiki Vandeweghe.

• The Cavs got financing from the county for their new log cabin-inspired practice facility. Hope LeBron likes it!

• Good stuff on Luol Deng and Chris Duhon, who are in Africa with Basketball Without Borders.