No Refs Were Harmed … 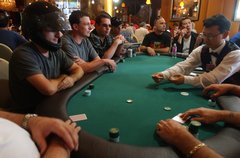 Yesterday, the NY Daily News reported that the League suspended six refs for, um, let’s see here … look, it’s not very clear. From what I could gather, however, the six were reportedly disciplined for minor stuff like going to the casino.

Today, reps for the NBA and the refs’ union confirmed that some referees ran afoul of the League’s gambling policy, but they completely denied the report that disciplinary action had been taken. From USA Today:

“There is no truth to the report,” NBA spokesman Tim Frank said in an e-mail.

“To my knowledge no one has been disciplined,” referees’ union spokesman Lamell McMorris said

Time to throw on my Oliver Stone conspiracy fitted: This gambling thing is far greater reaching than the League is letting on; Donaghy wasn’t the only one in on the take. This is crisis-management at its finest.