When Raptors guard Norman Powell was growing up, his hoop dreams were shaped by Kobe and the Lakers. 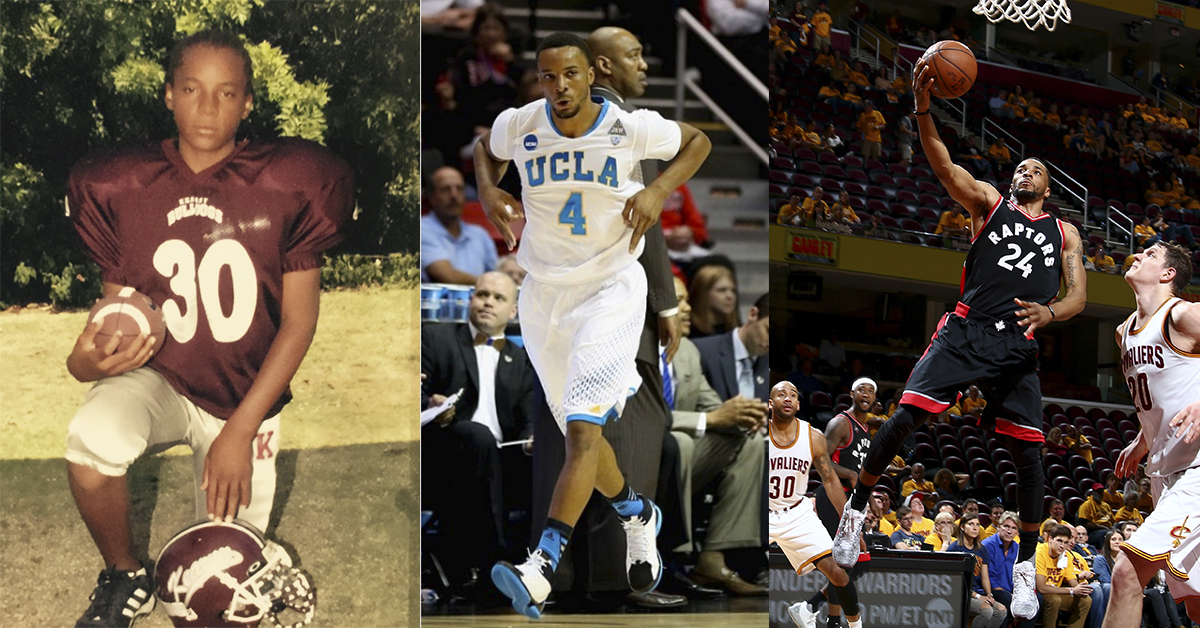 After a four-year career at UCLA, Norman Powell’s hoop dreams came true on Draft night when Toronto selected him with the 46th pick in 2015. Here, we chat with Powell about growing up in San Diego, and how those dreams were shaped at first by Kobe Bryant and the Lakers.

Norman Powell: The earliest memories I have of playing basketball are with my uncle. He always used to take me to Balboa Park [in San Diego]. We called it Muni. We’d play one-on-one and I’d shoot around with him. He would always beat me, but I’d get so upset and competitive that I’d never leave the court until I won, so he’d let me win a couple of games.

SLAM: You were a Lakers fan from the start, right?

NP: I became a Lakers fan watching old games—it was Larry Bird against Magic [Johnson], those matches. I instantly fell in love with the Lakers and then I had a deep connection with Kobe, just seeing his passion, grit and determination to be the best.

SLAM: Is it crazy that your first year in the League was Kobe’s last?

NP: Looking back now, it’s crazy. People keep asking me if I’m going to change my number back to No. 4 since [Luis] Scola isn’t here anymore, but nah. I’m keeping No. 24. It means something to me. Especially having a picture with Kobe where we both have No. 24 on. I can’t even put that into words. Knowing you played against him in his last season and played against him in his last game in Toronto is crazy.

SLAM: Did you know that DeMar DeRozan’s No. 10 was for Kobe’s Olympic number?

NP: I’m sure that if that was a guess on a multiple choice I would have selected that just because of how much of a follower of Kobe he is. Just being in L.A. you can see, Kobe is L.A., DeMar is L.A. I look up to DeMar; DeMar looks up to Kobe. We all look up to Kobe. It’s fun that I’m wearing No. 24 and he’s wearing No. 10 and it all had something to do with Kobe. Even my numbers growing up had something to do with him. I started wearing No. 4, because in high school you couldn’t wear No. 8 so I wore No. 4 because of that. My travel ball team in AAU, No. 8 was taken, so I wore No. 16. There’s just always a connection to Kobe. He’s just a transcendent player. Everybody can find something to relate to him and make you love the game.

SLAM: Do you think work ethic is something you learn or something some people just understand instinctually?

NP: I think it’s both. You’ve got to watch, you’ve got to be able to be a good observer of the things around you and you’ve got to be taught. People say, “Oh, you’re just born with it.” No, you’re not born with this. It’s something you’ve got to work on every single day. People think Michael Jordan was just gifted and was meant for this. No, he worked at it every single day to become the player that he was. Watching my mom struggle [when I was younger], really continue to fight, work to achieve the things she wanted, taking care of the family, getting to where she wanted to be with her career, pushing us with track-and-field, even on days when we didn’t feel like running, talking to us and teaching what it takes to be successful on and off the court or field, that was instilled in me at an early age. My uncle, being a father figure in my life, he did that as well. I think it was natural for me to be that type of player and have that type of focus.

SLAM: You have a tattoo on your arm for your uncle who passed away when you were in high school. When you’re out there on the floor now, do you think back to those days at Balboa Park?

NP: Every time, before I step on the court, I thank him and I thank God. The national anthem is where I talk to myself about the game. When it’s over I look up in the stands and visualize him being there, tell him I love him, I miss him and this is for him.