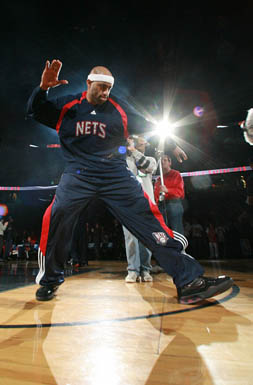 Lang’s on some alleged “vacation,” so you get me (Russ) again for the nightly wrap-up. As for me, I should really be in Jersey tonight. The last game I went to was the Nets’s last game of the regular season, the important win over Chicago. But instead I’m sitting home, watching the NBA on ESPN, listening to Hubie Brown. Things could be worse, I suppose, but still.

The Raptors are using their fourth different starting lineup this series. Four lineups in six games. It’s like Sam Mitchell’s throwing the Coach of the Year trophy back in the League’s face. “Not only can I not settle on a starting lineup, but we’re gonna lose a first-round series despite having home-court advantage—in SIX games! In your face, media!”

Jason Kidd’s shooting is still suspect sometimes, but it’s hard to believe that there is a more complete basketball player. Any would-be baller would benefit from just watching him play. Things may not always work out, but he almost NEVER makes a wrong or rash decision.

I refuse to believe that Jason Collins is a serviceable NBA center. He’s six fouls with cornrows. The positives? He’s adept at drawing charges (OTHER SKILLS: Falling down), and since he’s so incompetent on offense the Nets don’t bother slowing up their break to wait for him.

It’s hard to figure out why Mo Pete got so little playing time this season.

Have I mentioned how much I love split-screen interviews? Especially when a sideline reporter awkwardly tosses softballs at David Stern. Isn’t there a game on or something?

The Nets as a whole settle for threes way too much. With Jason Kidd on the floor there’s no excuse for that. If everyone kept moving without the ball, layups would be there for the taking. (Even though they’re 5-11 from three.)

The Raptors, on the other hand, can stroke it.

Is it just me, or does T.J. Ford look a little like Tiger Woods?

There’s like 30 seconds left in the first half, and I just realized I could be watching this game on YES. Man. Mark Jackson or Hubie Brown? That’s actually a tough call. I got Mark for the last 30 seconds, and the Nets go into the half down three. They do NOT wanna go back to T-Dot.

Staying with YES for the second half. Mark Jackson and Ian Eagle in the heezy.

Good things happen when you go to the rim. I will ALWAYS believe this. Because other defenders will close on the man with the ball, and if it does come off the rim, teammates will be free to get their hands on a putback. In short, aggressiveness causes chaos, which benefits the offense. And the Nets are more effective than most at attacking the rim. Not sure why they don’t do it more often.

Andrea Bargnani looks like he came straight off the set of Animal House.

Mikki Moore led the NBA in field goal percentage this season, and he didn’t just do it on dunks and putbacks. He’s got a nice touch from up to 20 feet out, and while he’s not much at creating his own shot, he’ll take anything Jason Kidd can give him.

Figures that after I write stuff about the Nets’s three-point shooting that they’re lights-out. Nine of 15 midway through the fourth with Boston Snackbar damn near unconscious after his 0-7 performance in Game Five.

Overheard from Sam Mitchell in the Raptor huddle: “WHAT AIN’T NO COUNTRY I EVER HEARD OF! DO THEY SPEAK ENGLISH IN WHAT?”

There’s been a lot of talk about Chris Bosh coming up small in this, his first playoff series, but he’s taking it right at Jason Collins in the fourth quarter. The Raptors sure aren’t going down without a fight.

Pet peeve: Guys shooting with their toe on the three-point line.

Chris Bosh with a hell of a shot off glass over the doubleteam with inside a minute to give the Raptors a one-point lead. Clutch.

In the end, the opportunities were there but the Raptors couldn’t take advantage of them. Carter missed a three early in the shot clock with 30 seconds on the game clock, but on the next Nets possession Jefferson hit a tough spinning layup over Bosh—who probably should have fouled, as the Nets were shaky from the line in the fourth. And the Raptors squandered their last chance—with starting point guard T.J. Ford on the bench, Calderon dribbled down the clock before trying to force the ball in to Bosh, who was fronted by Jefferson. Jefferson got the steal, pushed it ahead to Kidd (who AVERAGED a triple-double in the series), and time ran out. For Coach of the Year Mitchell as well as the Raptors? We’ll see. Meanwhile, the Nets advance to face LeBron and the Cavs, and I get to go out.