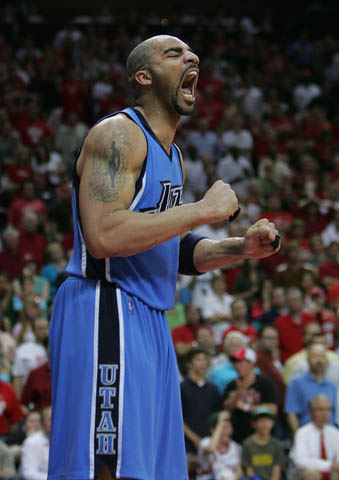 I wonder if Craig Sager’s closet and Clyde Frazier’s closet ever hang out?

The Jazz are in the powder blue, and they’re smoking hot early. They just (shudders) play the right way. Pretty much every shot they take is the right shot. Well, tonight so far at least.

Dikembe Mutombo is amazing. In every possible way.

Utah’s up double digits early in the second quarter. “It’s a shaky start for the Rockets in all departments,” Marv Albert astutely notes. Indeed.

Tracy McGrady gets left WIDE open for a three, he hesitates, and is lost. Paul Milsap converts on the other end, and the Jazz are up 13.

Do the Rockets rely too much on Yao Ming? I can’t help but thinking that the dump-it-in-to-the-post-and-watch offense isn’t very good. Then again Van Gundy did the same thing in New York—and didn’t get anywhere until Patrick Ewing got hurt and he had to go with Marcus Camby and Latrell Sprewell. Can’t help but think that Tracy McGrady would be far more effective in a fast-paced offense where he’d get the chance to take advantage of mismatches and fast breaks. At least things speed up whenever Dikembe checks in. OK, not really.

Deron Williams has 11 points and seven assists with 7:30 to go in the second quarter and the Jazz lead by 16.

Andrei Kirilenko should kill his barber. Stylist. Whatever. Seriously Drei, it’s embarrassing. To all of us. (Whatever that is, it’s decidedly not a Mohawk.)

Yao is three of eight from the floor after hitting his first three shots. Feel free to do the math.

I know I sort of said it already, but using Tracy McGrady to feed Yao Ming in the post is like using a Lamborghini as a golf cart.

And maybe Yao shouldn’t get blocked by Andrei Kirilenko so much.

Carlos Boozer should be allowed to play with a hardhat on. If I were Carhartt, I’d be calling him for endorsement purposes.

Battier, too. Although can you really be blue collar when you went to Duke?

Tracy McGrady posts up Derek Fisher, and across the country mothers cover their children’s eyes. Rockets to within six. Four, on a feed from McGrady to Howard. They’re on a 13-2 run and the crowd is awake.

Much like Wu-Tang, the Jazz swarm on defense. No word yet on whether they’re for the children.

And Williams goes straight at Yao to set the final gap of the half—Jazz lead at the half (for the seventh straight time), 53-43. McGrady has 13 points and nine assists.

At the half, Charles Barkley continues to insult the Yay—directly to Baron Davis and Jason Richardson, no less—for no good reason. He does have a point that pretty much everyone had Dallas beating Golden State, and he’s the only one getting killed for it. Then again, most people aren’t on TNT’s NBA show.

And DOWN GOES YAO! Hopefully he doesn’t require macrofracture surgery. He stays in the game, so I guess not.

The Rockets have come alive in the first half of the third, with crisp ball movement and something of a sense of urgency.

Memo is TOUGH, though. It’s crazy to think that the Pistons just let him walk–and that they’re still so good themselves.

Is that a “UTAH SUCKS!” chant? And Yao snuffs Boozer.

Meanwhile, the Jazz absorb a Rocket run, Yao picks up his fourth foul, and Boozer goes to the line to stretch it back to double digits. 71-60. The Jazz are tough, man. They lead by eight at the end of three, Carlos Boozer has 25 points and LeBron James’s everlasting animosity.

The Rockets are 1-25 when trailing after the third quarter. The one win happened to be Game Five in this series, but still. Not a pleasant stat for Houston fans. Then again, Yao scores four straight points and Skip gets a steal and goes to the line. He only hits one, but the rebound goes out of bounds off the Jazz. McGrady drives in for a layup, and it’s a one-point game with 10:30 to go.

MATT HARPRING. Four straight points right back. And then Luther Head—who was quite the marksman during the regular season—splashes a three to bring it back to two.

Skip winds up tying it with a three off glass that he absolutely didn’t call, and Yao gives the Rockets their first lead since 2-0 with a pair of free throws—all with McGrady on the bench.

The Jazz aren’t done. Down four, Boozer drives on Yao, hits—and the foul! Yao’s fifth, with 6:55 to go. Exit Yao, enter T-Mac. Gut check time. And he answers the call. First a pair of free throws off a Kirilenko foul, then an and-one (he misses the free throw but taps the rebound to Battier).

Booze won’t be stopped, though. He bowls over Battier for his 30th point, and it’s back to three, and Kirilenko nets a three from the wing (over McGrady) to tie it back up with just under five minutes to go. McGrady misses, and Boozer comes in with ANOTHER and 1. It’s not like Yao can stop him either—although he’s just checked back in—it’s that Boozer is a bad mother—. Yao comes right back with an and-one of his own to tie it back up with four minutes to go. Did I say this would be a bad game? My fault.

Okur with a deep three. Three minutes. Yao bulls Okur out of the way for a dunk. He’s got 27. And Deron Williams comes right back with a layup in traffic. Yao is stripped, the Jazz pull it back. Two minutes. Chuck Hayes brings it back to one (on an uncalled travel), and the Jazz call time.

I’m pretty sure that if you trapped Carlos Boozer between a rock and a hard place, both the rock and the hard place would lose.

McGrady finds Yao inside, who’s fouled hard by Harpring. No easy dunks. They both wind up on the floor. We’re under a minute. Yao hits both, it’s a two-point game. Okur misses a corner three, and Harpring keeps it alive. Deron with it up top, Okur misses another jumper, and Skip fouls Boozer on the rebound. Boozer to the line with 19.9 left. He’s been money all night. Gets both. Jazz by four. Boozer has 35 and 14. He’s an absolute monster. Tracy McGrady has less than 20 seconds to save his season.

He gets a layup, but the clock runs down to 9.8—and they don’t foul on the inbounds until 1.8 seconds remain. They finally catch Kirilenko in the corner after inexplicably failing to foul Deron Williams on the initial catch. Drei hits both, putting the Jazz back up four. Only a horrific defensive mistake can save the Rockets now, and it’s hard to imagine a Jerry Sloan coached team making one.

The inbounds pass goes to Yao, he flicks it up over his shoulder, misses, and the game and the series come to an end. And once again, Tracy McGrady’s playoff journey ends in the first round. Tracy, Kobe, Dirk, Dwyane, Shaq—all home for the summer. Hard to believe.

(And someone at the arena has a sense of humor, at least—the strains of Tom Petty’s “Even the Losers” are audible behind Craig Sager’s postgame chat with Carlos Boozer.)