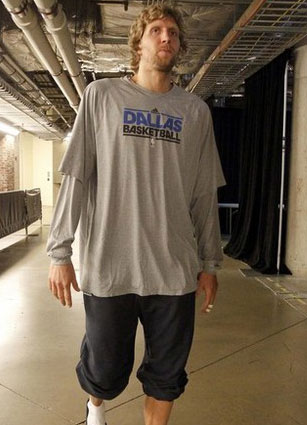 With last night’s madness in the rearview, I hit practice today to learn how both teams were recovering and preparing for Game 4. First up was the final 30 minutes of Mavs practice, during which the roster was split up—big men on one side of the court, small guys (and, uh, Brian Cardinal) on the other. Peja Stojakovic was practicing downlow drills and mid-range jumpers with the forwards and centers, which I found strange, given that his three ball has been uncharacteristically off and that’s exactly what was being worked on at the other end. Over there, JJ Barea and Cardinal wound up in an impromptu shooting competition, won at the “buzzer” by Barea. Respect.

Then the media was free to badger the Mavs players and coaches, during which Coach Carlisle answered some questions in the interview room. “[The Heat] have a system that’s very effective,” he said, “and they put you in positions where you gotta get the ball moving, and try to keep them moving around so you can attack. They do a great job at the point of attack, and so it puts a bigger premium on stopping them so you can get the ball and run it.” There, and elsewhere, he made a pretty basic point: Miami is crazy athletic, so you have to take advantage of every opportunity, be it a loose ball, and open shot, a free rebound, etc.

Jason Kidd and Dirk Nowitzki followed one after the next, and both made pretty basic points regarding the team’s need to close out games. Kidd was asked about turnovers. “If we are going to get one, throw it in the stands, because if you don’t, and they get the ball, then they get a lay-up on the other end.” Essentially, if you’re sloppy against the Heat, they won’t only turn that into defensive stops, but right into quick buckets. Having LeBron James and Dwyane Wade on your team is pretty good for that stuff.

More Kidd: “I think we’ve been playing from behind since Game 3 in Oklahoma. This isn’t anything new. So we gotta be prepared, mentally and physically, come tomorrow night, and protect home. Gotta take one game at a time, and tomorrow we gotta be focused and ready to go.”

And Dirk: “They do a good job on our shooters. Our ability to spread the ball and shoot is a big reason why we made it to the Finals—we really spread the ball around and shoot and make big shots, but for some reason [the Heat] are so long and athletic on the perimeter that they’re able to swarm me and my post-ups, and when I swing it they’re athletic and quick enough to get to the shooters on the weak side and run them off. So you gotta give them credit. We just looked at the film, and we have some opportunities … and when we get those opportunities, we gotta make the most of it.”

In other words, the Heat utilize the defensive close-out better than anyone, and it’s rally screwing up the Mavs’ flow. But when it’s not there, they have to knock down those shots every single time. No open misses allowed. None.

After Dirk’s presser, a German reporter approached the Mavs big man in the hallway and asked to measure his hand. “Twenty!” he yelled after holding a ruler against Dirk’s right paw for a few seconds. Jason Terry then asked the reporter to measure his hand, and started yelling something that I couldn’t hear from where I was standing at Dirk as the two walked away.

The Heat followed, with their media availability coming before their practice. Coach Spoelstra spoke to reporters first. Call me crazy, but I’ve really enjoyed Spo’s actual basketball points—as opposed to, you know, the “who should do what” narrative the media, and pretty much everyone, loves so much—throughout these Playoffs.

On allowing Dirk to get his and focusing on shutting down everybody else, he said: “Nowitzki is a shot-maker. Arguably the best one in the League, in his ability to get a shot off, even off-balanced shots, but [they’re] high percentage shots. So we’re trying to make it tough, always contest, but at the same time we want to get to their shooters and make it tough on them as well. It’s never as simple as allowing someone to score and staying home on everybody else. They do enough actions, multiple actions with people involve that you have to guard, multiple situations with players, and having to protect the paint and get to shooters, and try to keep a body on [Dirk] at the same time. It’s a whole lot easier said than done.”

DWade and LeBron (separately) followed, both reiterating that they’re focused on tomorrow night and staying focused on a game at a time. More entertaining, though, was the shooting contest the Heat had to start off their practice. (Seems safe to assume the Heat staff wanted to hold the strategic stuff until the media cleared out minutes later.)

While Chris Bosh and Juwan Howard practiced post moves on one side of the court, just about every other teammate—save Joel Anthony and Udonis Haslem, who didn’t seem too interested in a three-point shooting competition—lined up around the three-point line and took turns launching threes. I couldn’t figure out the rules of the game (didn’t walk into practice until it was already underway), but the actual guidelines seemed far from the point. What I got out of watching, though, was that these guys are friends. And if they aren’t, they do a hell of a job acting like it. The entire time they were laughing, joking on each other, talking shit, all that stuff. Teammates tend to really like each other when they’re winning, meaning the score of this series has put a huge smile across Miami’s collective face.

Also worth noting: Eddie House was wet. Soaking wet. He won the competition’s first round, and a few times overcame pretty legitimate teammate distractions with ease as he made it rain from the top of the key. Doubt that’ll earn him any minutes, but just saying.

Maurice Bobb and I will be back soon with more. We’re live-blogging every Finals game from here out, so you should know where to find us tomorrow night.