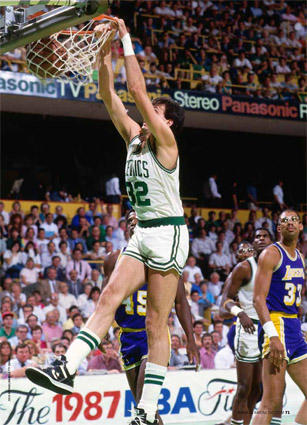 Whether on offense or defense, when his spindly legs were splayed and when his broomstick-like arms were fully extended, Kevin McHale morphed from an unusually tall, unintimidating son of a Minnesota miner into a gangly, menacing power forward for the Boston Celtics. Ultimately, that transformation helped earn McHale three Championships and a spot in the Hall of Fame.

Essential to the success of the 1980s Celtics, this seven-time All-Star and six-time All-Defense team member used his length and an arsenal of signature post moves to dominate both sides of the parquet for 13 seasons.

Though he stopped playing in ’93, McHale never really left the NBA. He’s spent the majority of the past 18 years as either a coach, consultant or GM for his hometown Timberwolves—where he was most famous for drafting Kevin Garnett and most infamous for trading Garnett away.

While working for Minnesota, McHale shied away from discussing his illustrious playing career. Now employed as an analyst for NBA TV and TNT, we were finally able to spend time talking green and white with the humorous, strongly Midwestern-accented McHale.

SLAM: Red Auerbach orchestrated a Draft week trade that ended up with you starting your career in Boston. Do you ever imagine what your career would’ve been like if you started elsewhere?

Kevin McHale: Yeah, not nearly as good, I can tell you that. The way the Draft was laid out, I didn’t know where anybody was gonna go or what was going to happen. Then, the night before the Draft, Boston makes a trade with Golden State. Golden State goes from three to one; Boston also gets Robert Parish. I get a call later on in the evening, Red [Auerbach] says, “Utah is going to take Darrell Griffith two, so we’re going to take you three. We got a big guy in Robert Parish we really like. We think that’s really going to work out. We want to get bigger across the front line.” And, man, what a blessing. Unbelievable. Got there and just started playing. Larry [Bird] was in his second year; in training camp we had Tiny Archibald and Dave Cowens, Pete Maravich, a bunch of veterans. It was a phenomenal experience the whole time.

SLAM: When you came in, did you know who Larry Bird was?

KM: Yeah, I didn’t know how good he was. When I called home, I was telling my buddies, “Man, Tiny Archibald is unbelievable! Playing with Dave Cowens, who won an NBA Championship in ’76, and Pete Maravich and Tiny—you’re always open!” And I said, “And this Bird guy is really good, too” [laughs]. At that time, nobody knew that Larry was going to end up being what he was. He was really good, though.

SLAM: Winning a Championship in your first season, did you think that was how easy it was going to be moving forward?

KM: [Laughs] Yeah, kinda. Unfortunately, I found out they don’t [grow on trees]. I won a couple more after that, but they’re hard to come by. I think what it did for us though, it really got us to the point where we thought really big. We didn’t think about winning games in the regular season. We wanted to win Championships. So, our whole thinking just became really big. When you win one that early, nothing else satisfies you. You want to win them all. So it was really good for us, because it pushed us really hard.

SLAM: Those 1980s Celtics teams were great, and you guys won three titles. But did you ever feel like you underachieved? That you had the talent to win even more than that?

KM: Nah. You know what? There was a guy Kareem, and a guy named Magic, and a guy named Worthy. They kinda got in the way a little bit, too [laughs]. They were really good. They were every bit as good as we were. And again, I tell this to people, in order to win you got to have a little bit of that good mojo luck going, where you’re not having injuries.

We won it in ’81. In ’82, that was the second best team I ever played on—the best team I ever played on was the ’86 team. The ’82 team was much better, I thought, than that ’81 team. And we’re playing the Sixers in the Conference Finals, and Tiny dislocates his shoulder. You know, he can’t play. And we end up losing in seven. So, it takes a little bit of that luck. Would I have liked to have had more? Yeah. But you know what? I’ll go to my grave with three and that will be plenty.

SLAM: The team was talented, and you spent a lot of time as the sixth man. How did that come about, and was it hard to get you to go along with it?

KM: No, not at all. Red Auerbach had started the sixth man role with Frank Ramsey; he was the original sixth man. Frank Ramsey was an All-Star and a really good player, and Red, an innovative guy, decided he wanted to get one of his top players to come off the bench so that they’d have a huge scoring punch and really an anchor for the second unit. So Red talked to me about it. He said, “We want you to do it. I think you’ll be great at it. This is a role that is really vital to the team.” And he always let you know how important that was.

As a player, I never truly cared about starting. I wanted to play, and as sixth man I played a lot of minutes and finished the games. Red would always say, “I can tell you who the coach likes, it’s who he starts. I can tell you who he trusts, it’s who he finishes with. And I finish with you!” So it was good for the team and it was good for me as a player. And again, Red spent a lot of time reinforcing that role—not only reinforcing, but in his own way thanking you a lot for sticking with it. If I had a really good couple of weeks he’d say, [mimicking a faux, gruff Auerbach voice] “Boy! Do you want to start now?” I’d go, “No.” He’d go, [in his Auerbach voice] “That a boy!”

SLAM: You had a seemingly endless array of post moves. Where and how did you develop them, or were they just natural?

KM: I actually didn’t start growing ’til I was a sophomore in high school. So I was small, and I had to get shots under people, over people, throw shots. I just developed a lot of different things. I kinda always had a ball in my hand. I’d play one-on-one, two-on-two, three-on-three. I just played ball all the time. And when you play enough, you just develop an ability to get the ball in the hole. And a big part of it is, even when I was a young kid and smaller, I could always put the ball in the hole. It was one thing I was always blessed with, being able to get the ball in the hole from different angles, and then I just played a lot. So when I got in the post, I was just upfaking, pivoting, just trying to shake loose from guys. And the good Lord blessed me; I grew from 5-11 as a sophomore to 6-7, 6-8, maybe close to 6-9, by the end of my senior year of high school, and I grew to be 6-10 and a quarter. But I never knew that [was going to happen]. When I first became a basketball junkie, I was just a small, little skinny dude and then I became a real tall, skinny dude.

SLAM: Were you working on your guard skills at the time?

KM: Yeah, just playing ball. Just shooting, handling, playing, rebounding. Just playing. Back then, I started on the varsity—I was probably 6-0. Believe me, at that point I never thought I was gonna end up being 6-10, first of all. Secondly, I just loved to play. I didn’t have any grand scheme of, like, I’m going to play in the NBA someday. I was always like, I really want to be good. That was my thing: I really want to be good.

My dad always said, “The harder you work, the better things work for you.” So I said, I’m gonna work real hard, because maybe good things will happen. And all of a sudden it did. But growing up in Hibbing, MN, as a 6-0 sophomore in high school, I wasn’t thinking about the NBA. I was thinking about starting on the varsity [laughs].

SLAM: How would you describe the great rivalry you and the Celtics had with the Lakers?

It just brought out the best in everybody. Two different styles. We ran with most teams, but with them we couldn’t run; we had to slow it down a little bit and get a little bit more of a grind it, hold them, grab them game. So it was styles that made it. Showtime Lakers and Blue Collar Boston. There was a lot of really good things that went into that rivalry.

SLAM: You broke your foot and played on it for a bit. Do you regret playing on it or playing with any other injuries?

KM: I don’t know. I say now in hindsight I wouldn’t do it again, but if I was out there and we had the chance to win a Championship, I’d probably do it again. I mean, how often do you get a chance to go down that road? It’s the Finals; how often do you get the chance to do that? It’s one of those things where the mature side of me now that I’m older says I wouldn’t do it. But you put me back at 27, 28, and say you have a chance to win another Championship? I’d say, Let’s tape it up; let’s go.

SLAM: How’s your body feel nowadays? Do you have a lot of residual wear and tear?

KM: Yeah, no question. But, again, overall, for all the miles I put on, I’m so blessed health-wise. I can’t complain. I see a lot of guys who have it a lot worse. Yeah, I get a little stiff once in a while. But to have lived that dream and be able to play basketball and just fall in love with basketball at 12 and then play ’til I was 35, wow. And here’s the funniest thing: They actually paid me to play, which was amazing.

SLAM: Did you know the whole ’92-93 season that it was going to be your last?

KM: No, I knew about the middle of the year, when I drove to practice and was actually dreading going to play basketball—because it hurt and I was doing so much therapy and couldn’t get over the hump. I remember driving to practice, it was probably about January, and it was the first time in my life I wasn’t excited to go play basketball. It was just such an odd feeling. That really wore on me for about a month. Then I said, I love this game too much to just do it for pay or to do it because people think I should.

SLAM: You’ve been a player, coach, GM and now you’re an analyst for TNT. Is the view of the game different on TV than it was courtside?