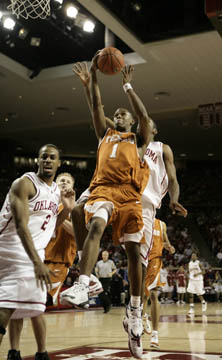 While arguably not mine or Ryan’s finest moment (I can’t remember who wrote the headline), “You’re the Man Now, Dog” served as an apt, if overtly corny, lead-in to the piece I wrote on Daniel Gibson in SLAM #91. In admiration for his break-out performances against the Pistons, I’m re-running the piece as it read then below. What’s noteworthy about it is the way it serves as the latest proof of just how short everyone’s memories can be. I mean, google searching stories about Gibson’s play in the EC finals is a long lesson in all the ways “out of nowhere” can be used. But in reality, all that happened was that the man had a worse-than-expected sophomore season, was savvy enough to not to sweat getting into the first round if he went to the right team (which the Cavs most certainly were) and took a little while to get adjusted mentally and physically to the NBA.

But go back three years and it all makes sense. Gibson, featured alongside fellow future Longhorn LaMarcus Aldridge in our Punks section in the summer of ’03, finished his prep career at Jones HS as a McDonald’s All-American, a Texas state champion and a consensus pick as one of the top point guards in the country. He then had a great freshman season, (“Freshman of the Year,” according to Dick Vitale), and would have been a first-round pick had he come out then, which would have meant an explosion in the ’07 Playoffs would not have been out of the question. Instead, he went back to school, prompting my article in the summer of ’05…

There are adjustments every freshman must make when leaving the “I-run-this-sh—” high school days for a level where most everybody was the big dog in their hometowns. So experienced teammates come in and handle the leadership roles while rooks get their feet wet. Texas pg Daniel Gibson had that type of security blanket pulled out from under him last season. Expected to struggle at first in the Big 12 and then fit in as a playmaker, helping big-time running mates LaMarcus Aldridge and PJ Tucker score points, Gibson ended the season as UT’s heart, soul and first scoring option.

“Last season was difficult, different and challenging,” says Gibson, who saw his fellow frosh Aldridge go down with a midseason hip injury, then watched Tucker begin an academic suspension two games later; both missed the rest of the season. Big man Brad Buckman and some other upperclassmen were still around, but with Aldridge and Tucker gone for the year, the Horns became Gibson’s team. “Without PJ and LaMarcus I had to deal with teams keying on me,” the 6-2, 190-pounder said. “I had to forget I was a freshman, because I was being counted on to perform and take big shots. It was all good experience, though. I think it made me a better player.”

Not that he wasn’t mad nice already. Blessed with the body of an NBA point and D1 bloodlines (pops Byron Gibson played for Guy Lewis and the University of Houston from ’76-80), Daniel came to Austin after a dream senior season at Jesse Jones HS in H-Town that saw him become the city’s all-time leading scorer and lead his school to its first state title since ’65. The way Gibson remembers it, the biggest question concerned the league he was joining. “There is no question that the Big 12 is a physical league, and some people wondered if I could handle it, but I think I did OK,” he says. “I wouldn’t say I was ‘tired’ by the time the year ended, but I am working on my conditioning now because I want to go for the whole 40.”

Last season, Gibson had to settle for playing 32.8 minutes per game and averaging 14.2 points and 3.9 assists, all of which led the ’Horns. And oh yeah, he was Big 12 Freshman of the Year.

With Aldridge and Tucker expected back in what should be an awesome UT lineup in ’05-06, Gibson’s next challenge won’t come for another year or so. You know, when he’ll probably move on to the Big 30.—BEN OSBORNE

An update to the Gibson/SLAM history came this past December. I was working on a Monta Ellis feature for SLAM 106 and happened to be out at the Meadowlands for a Nets-Cavs game. At the time, Gibson had shown flashes of excellence (in each of the two games he’d gotten 30-plus minutes he’d scored double-figure points), but he’d also copped a bunch of DNPs and was, in essence, a benchwarmer. I approached him to say hello (as UT’s great sports media guy, Scott McConnell, always told me, Daniel is a very pleasant dude to rap with) and reminisce about when I’d done the piece on him before his sophomore year. I also wanted to ask him about Monta, who I figured Daniel knew well from their high school camp/AAU days. Sure enough, Daniel raved about what a Monta always was (“didn’t matter how big he was; he could just get buckets,” Gibson told me).

More relevantly, Gibson confided that he saw Ellis—the second-round pick turned second-year star—as a role model. “Being in my situation, another second-round pick that isn’t getting much of a chance as a rookie, I gotta’ be aware of a guy like that,” Gibson said. “I’m really happy for him and I’m going to try to do the same thing.”

Looks like next year just came a little early.