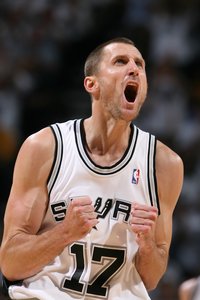 You all know that I’m a big Lakers fan. And yes, of course, I’m thrilled that the guys were able to escape San Antonio with a commanding 3-1 series lead over the defending champs. But, yeah, that was a terrible non-call on Brent Barry. Simply atrocious.

By now, you’ve seen the play a million and one times – the Spurs are down by two points; their season on the brink. Bones Barry gets the rock with two seconds remaining, pump fakes, and Derek Fisher lands on his left shoulder … No whistle.

Barry’s desperation heave then glances off the backboard harmlessly, and San Antonio could be toast.

He was fouled. The Spurs were robbed, and they have every right to form all kinds of conspiracy theories about the League desperately wanting Kobe’s ratings-friendly Lakers in the Finals.

Look, I can admit the truth. But don’t expect me to feel bad about it. Because I don’t; not in the slightest. Them’s the breaks. Thanks, Joey Crawford! I’ve always liked your style.