Okafor for Thomas Deal in the Works? 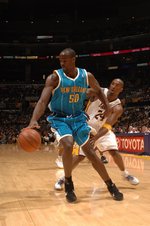 The New Orleans Hornets are reportedly ready to throw in the towel this season. With the head coach looking for new work, and the superstar point guard injured and unhappy, management in N.O. figures it’s time for change.

And by “change”, I mean they want to save themselves a buck by shipping their expensive, and newly acquired power forward out of town for an expiring contract.

A source with knowledge of the situation says the Kings are discussing a trade with New Orleans that would send Kenny Thomas to the Hornets and bring center Emeka Okafor to Sacramento.

The deal would be ideal for the Hornets, as Thomas’ expiring contract worth $8.7 million is just the kind of contract that would trim their enormous payroll. The question, of course, is whether the Kings see Okafor as a big man solution worth the five years and $62.5 million left on his deal.

As the linked article points out, no deal is imminent. Both sides are just feeling each other out at this point. But for the discussion to even be taking place, makes Hornet management’s outlook crystal clear.

Chris Paul’s nightmare looks to only be getting worse.