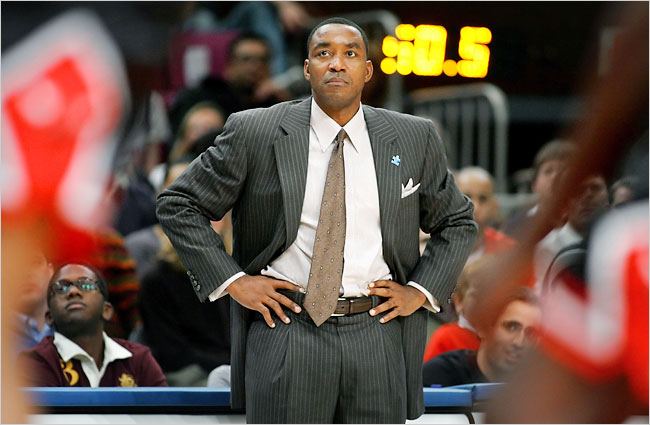 Isiah Thomas, the favorite punching bag of, well everyone, has received a contract extension from James Dolan. A year ago at this time, there would be a greater sense of outrage, but the facts show that Isiah has performed up to the standard that his employer requested. If we were to dig deeper, we would see that last year Larry Brown was so destructive to the team that basically anyone could come in and stand around in a suit on the sideline and the team would show improvement.

The Knicks also happen to play in the worst division ever. Toronto is supposed to be a year away from competing at the very least, and their coach has the reputation of being too confrontational and days away from losing his job at all times. Naturally, Toronto is running away with the division and Sam Mitchell and coach of the year have been put in the same sentence. The Nets have been an injury wrecked disaster, as well as being one of the softest and worst crunch time teams in the league. Philly and Boston have each been accused of losing games on purpose. In the midst of all that, Isiah’s Knicks are in the playoff mix, but probably won’t win the division.

Some positive things that Isiah has done include convincing Stephon Marbury to buy into letting the offense run through Eddy Curry, keeping the team together after the brawl with Denver, surviving a rash of injuries, and managing to keep guys with seemingly fragile psyches from quitting on the season. I’m looking at you Jared Jeffries, Channing Frye, and in the most amazing turn of events of the year… STEVE FRANCIS!

I have very mixed feelings about this extension. On one hand, Isiah has turned the team around for the better. Curry is a productive NBA player, David Lee is a budding star, Steph has become the certified team leader that people who call him “Cancerbury” never thought he would be. On the other hand, the Knicks should still be a lot better than they are, even with the improvement. They’ve had a handful of games where they didn’t show up or played no defense whatsoever. Isiah the strategist has one play to be called in all late game situations, which is “Jamal Crawford clear out” since re-named “Steve Francis clear out.” But like I said, the team has shown improvement, so Isiah is here to stay.

And so the Knicks will stay the course. Lowered expectations are a wonderful thing (for Isiah). The team is much more fun to watch than it was last year and James Dolan can feel satisfied with an improving team, even if it will never get as far as say, the conference Finals in a weak conference.

Nice work Isiah. You saved your reputation. In a division with Mo Cheeks, Doc Rivers, Sam Mitchell, and Lawrence Frank, you are one of the better coaches.