OKC Thunder Down 2-1 to Miami Heat in NBA Finals 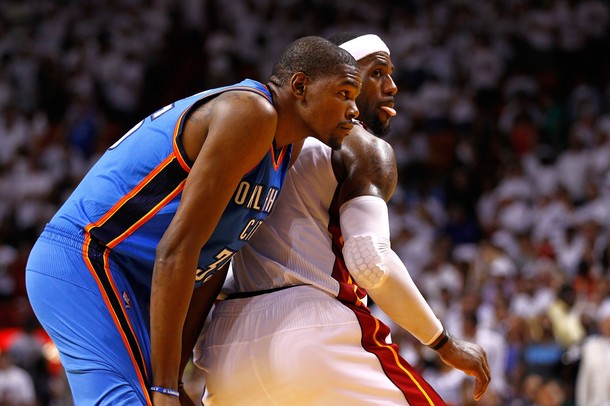 Doubt has begun to creep all around these young OKC Thunder, who let a golden opportunity slip through their hands in Miami last night, and must now climb out of a hole against the surging Heat.

In addition to shaky play late in the second half, and silly fouls throughout the game, the OKC Thunder seemed like they were trying to do too much individually in Game 3.

“We’ve got to understand that over there in the locker room, there’s a team that really wants it,” Kendrick Perkins grumbled. “They’ve got a couple guys over there who want this. … They want it. Nothing’s going to be given to us, we’ve got to go take it. We were just careless and sloppy. … We’ve got to know that we are in the Finals. We’ve got to trust each other. Tonight, we got back to ‘I’ basketball, the individual shooting over two and three people.”

Kevin Durant said: “Two games in a row, man, so I’ve just got to play smarter next game.” […] After scoring 17 and 16 points in the previous two fourth quarters, Durant didn’t come through in crunch time, finishing 2-for-6 in the final period of Game 3. “I know I have to do a way better job,” Durant said. “We’ve just got to own up to it.”

“Experience is not overrated at all,” Dwyane Wade said. “Tonight that helped us win this ballgame.”

The next two games are in Miami, but this series is far from over. The OKC Thunder have shown resilience throughout this postseason, and they should be able to bounce back.

But will it be enough against these ultra-focused Miami Heat, who seem unflappable when the chips are down?