OKC Will Finally Get a Name Next Week 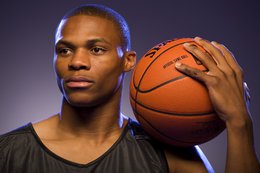 thun·der:
–noun
1. a loud, explosive, resounding noise produced by the explosive expansion of air heated by a lightning discharge.
2. any loud, resounding noise: the thunder of applause.
3. a threatening or startling utterance, denunciation, or the like.

Well, we can now safely add another element to the dictionary’s definition of “Thunder”: a basketball team that will win somewhere in the neighborhood of 13 games next season.

Following months of general confusion as to why the team had yet to formally announce its decidedly lame nickname, Clay Bennett and friends will let the world know that they’ve elected to call their new basketball franchise.

Oklahoma City’s NBA team is expected to announce Thunder will be the nickname at 5 p.m. next Wednesday, Sept. 3, when it releases the team name, its mark, the four team colors and logo at a press conference at Leadership Square.

The team has yet to confirm or deny whether they’re actually going with “Thunder”, but all signs point to that being the case.

In terms of jersey design, what color matches thunder? What kind of mascot are they going to have? More to the point, how will the poor sucker who gets the gig to don the mascot costume properly represent a concept such as “thunder”? These are the kind of questions that could keep one up all night long.