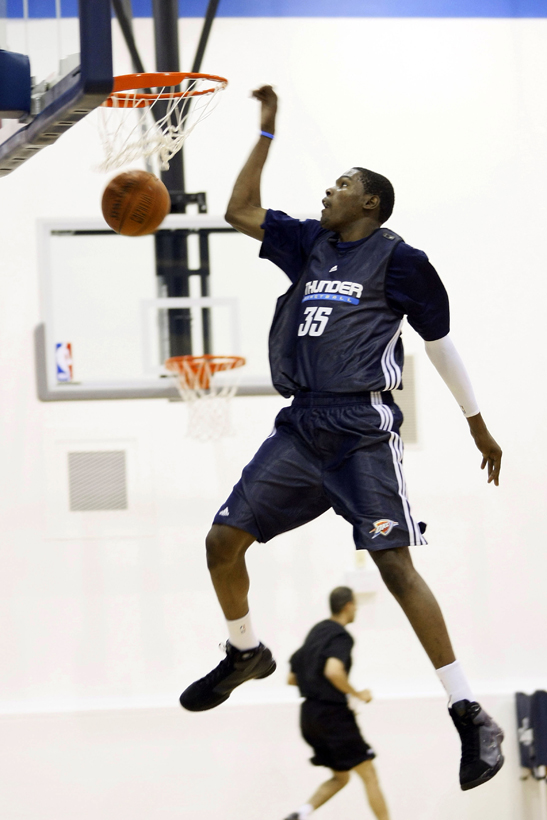 We continue previewing the Northwest Division with the Oklahoma City Thunder. You can read past previews here.

Although the excitement of NBA basketball is always enough to get me in the Wachovia Center, regardless of who the 76ers are hosting, I doubt the rest of Philadelphia shares my unbridled

enthusiasm – that is, before Elton Brand came to town.

That said, when the 76ers faced off against the Seattle Supersonics on March 7 last season, I will neither confirm nor deny reports that the people I attended the game with had a large amount of action on the over/under points scored, taking the over.

What transpired was amazing. The suddenly fast-breaking 76ers put up 117 points, well above their season average. The Sonics, however, looked more like a hung-over intramural team, forced to play a makeup game on a Saturday morning.

They sulked to their bench. It seemed like they were more interested in the dance team than what PJ was drawing up in the timeout. And unless he was calling one-pass isolation jumpers, they weren’t following his instructions.

Even through all this, they still had a chance to salvage our night by hitting the over. The Sonics trailed by 33 points, and we were the only ones left in the crowd. Donyell Marshall pulled up for a three-pointer as time expired, our fate clung to his follow through…but it clanked off the iron.

Seattle’s effort was disappointing, but if the glass is half full, you can chalk it up to two games in two nights and move on. I also watched Seattle live (at what point do I need to start referring to them as the Thunder?) on two other occasions last year, and they were considerably better both times.

Sitting in the Arena in Oakland, watching Kevin Durant sew up the ROY trophy by hanging 42 points on the Warriors in their season finale, I couldn’t help but see some light at the end of this tunnel. And although a great deal of that light is created by the 6-9 super long, second-year forward, he’s not the only one shining in Seattle. Excuse me, Oklahoma City.

Say what you will about Kevin Durant’s shot selection, but he’s a 19-year-old ROY with upside potential that makes Jay Bilas feel like moving furniture. As questionable as his choices were on offense early in the season, he showed improvement down the stretch.

Putting up numbers on a team that won 20 games last season won’t make Durant feel like a winner, but with another year under his belt, the ceiling on his game is still under construction and the blueprint looks like a hell of a roof.

The 2008-09 Durant has added muscle, patience, and, most importantly, experience that will help him do things like position for a rebound or pass up a deep three for a dime.

And for those of you who are still hung up on his max bench press, he’s repping out 185 this year.

I like Earl Watson, but he’s the type of guy who’ll get his numbers without really improving the players around him. That’s fine in most cases, but tough when you’re the point guard on a young team. I also get the feeling he’s sort of wasted in OKC, and he should be backing up a point guard on a playoff roster.

Russell Westbrook shot up draft boards after smashing his workouts. His rise can be attributed to a lot of things, but scouts can’t stop gushing about his speed and athleticism. Apparently his jump shot needs work, but so does everyone else’s on this roster, so that’s nothing new. With Luke Ridnour out of town, things are wide open and he’s going to see plenty of tick this season.

He’ll struggle at times, but trial by fire is the best way to improve in the NBA. It’s also beneficial for a young playmaker to come up with a young nucleus–Durant and Green–free from pressure to “win now.” Also, don’t discount the fact that the OKC faithful will be forgiving of a new franchise, which also happens to be the city’s lone professional team.

If he was available at no. 6, he would be wearing a Knicks uniform, and we wouldn’t be having a conversation about settling into the NBA.

A lot of people are down on Jeff Green after last season, but I’m not one of them. It’s fair to expect more production from a fifth pick getting 28 minutes a night, but for a rookie on a team devoid of talent and veteran leadership, he was often the focus of game plans. I think last season’s struggles will lead to improvements this year.

I remember watching Chris Wilcox play his first game in a Maryland uniform and thinking he was going to be the greatest power forward in NBA history. Granted, 98 percent of this assumption was based on him throwing down a one-handed dunk from just inside the foul line, so I’m not too surprised things haven’t exactly panned out. If Presti can unload him for draft picks, he’ll be wearing a new uniform ASAP.

You can basically sum up the Thunder’s chances this season with this statement: Nick Collison and Johan Petro’s rebounding ability may represent the team’s greatest strength, outside of their youth. Insert punch line here.

Robert Swift is healthy and scaring children again. I use the term healthy loosely, because by the time this is posted, a season ending injury is likely to have struck Swift. If I sound a little bitter, it’s only because I picked Swift as a fantasy sleeper last season – and he played in a total of 8 games. My man!

I hope this preview doesn’t come off as negative in anyway, because as a Knicks fan, I wish my team’s future was as bright as Sam Presti has things looking in OKC.

Presti is a general manager, but his business card should read: Hustler. He has assembled long-term talent in Durant, Green, and Westbrook and guys with reasonable contracts that other teams covet in Collison, Watson, and Smith. He also has a knack for coming out of trades with added draft picks and improved cap position.

Look no further than Kurt Thomas’s dealings last season. Presti agreed to take Thomas’s cumbersome contract off Phoenix’s hands, as long as Phoenix included two draft picks. He then turned around and flipped Thomas to the Spurs on the verge of their playoff run, acquiring yet another pick.

Although this isn’t confirmed, it’s been rumored that, upon closing the deal, Presti immediately threw on “I’m A HUSTLER” by Cassidy and hit up the local tat parlor with Robert Swift.