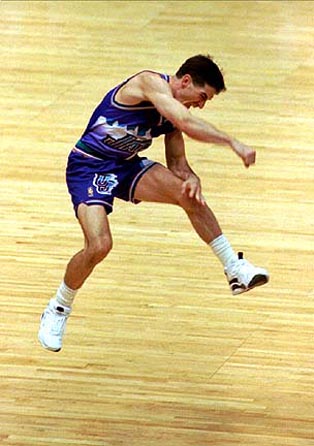 The best thing about collecting cards was trading with friends. A precursor to fantasy sports, trading glossy pieces of paper gave kids still young enough to wet the bed—that’s a generalization not a self indictment—a chance to pretend to be a general manager. Think about this seriously for a minute: Would the NBA be any different if it was run by 8 year olds? After all, survival in the cutthroat business that is “Rob a Babcock” (yes, that was a pun) depends on how morally bankrupt you are when trying to pull the wool over a colleague. In other words, can you combine common sense with the wherewithal and intuition to outsmart somebody else trying to do the exact same thing? Anyway, back to the NBA not being any different if it were run by little boys…

The corollary is pretty astonishing. Each general manager, or in this case each kid representing a general manager, has their own agenda. You’d have the savvy kids that knew what they wanted and what would be the best for their collections; the kids with foresight. Imagine a young Geoff Petrie on Juicy Juice. You’d have the kid that thought because he could beat you 1-on-1, whatever you gave him would enhance his collection as long as it was shiny. A young Isaiah Thomas on Sunny D. You’d have the kid that would invite you over to his giant swimming pool, hoping that he could entice you into a swindling. A young Mark Cuban guzzling HI-C.

My favorite thing about collecting cards back in the day was the humor that we made as industrious card sharks. In reality, these youthful jokes were merely the ancestors of the jokes that you make today with your boys when you stare dumbstruck something like this. Blair Rasmussen and Chris Morris for David Robinson elicits the same giggle as Nene’s current contract.

My favorite childhood endeavor was the abuse of a catch phrase that my friend Andrew and I created. At the time, we hated John Stockton. This was 93, circa Fab Five and the explosion of the baggy shorts that our parents wouldn’t let us rock. I think we hated Stockton because his excess of exposed upper thigh hair left us nauseous. The fact that a short, physically un-imposing white guy with a toolish army crew cut was on his way to becoming a Hall-of-Famer was completely immaterial.

To fully absorb you into this world, I created a plausible excerpt from one of our swap meets. To get an idea of how we said the phrase each time, I tried to phonetically spell it out that way and also italicized where certain syllables were accentuated. I also added in parenthesis what I like to call “rejection thought process”, i.e. why the trade was rejected and how that changes the way “How About John Stockton?” is said. And remember, to get the most out of reading this you’ll have to picture two skinny white kids, one sporting a mullet (me) and the other nearly sporting a mullet, sitting across a floor that has cards strewn all over it.

A trip down memory lane:

Me: How about Lee Mayberry and Todd Day for Nick Anderson and Donald Royal?

Andrew: How about…Joooohhhn Stockton? I just like Nick Anderson too much. He’ll probably get better. (It’s not a terrible proposal. He thinks about the deal while saying “How About” because he can follow those two words with anything if he wants to accept.)

Me: How about John Stoooccckkton? Vernon Maxwell is too cool. I heard he punched someone. (In this instance, I’m really not sure whether or not I want Mad Max on my team. I’m really torn, and I take the whole response to reassure myself that Vernon Maxwell is the type of badass that should stay in my collection.)

Andrew: How About a Don Maclean rookie, Doug West, and Sean Elliot for Kendall Gill?

Me: Hoooowwwww about John Stockton? (He should know better than to try and pry Kendall Gill from me. Kendall Gill is and was the man. How else can you explain his guest spot on My Brother and Me that qualifies as one of the greatest moments in Nickelodeon history. I knew right away that Kendall Gill wasn’t going anywhere.)

Me: How about John Stoockton? Ugh. This is impossible. (Lionel Simmons was certifiably gangsta back in the day, but it’s just not enough for Timmy Hardaway’s killer crossover.)

Andrew: Wait. Do we both have a John Stockton? This is awful.

Me: Let’s make the deal and then…uh, do you still have that lighter you found?

Me: Cool. Let’s make the trade, then light the cards on fire and stomp on them.